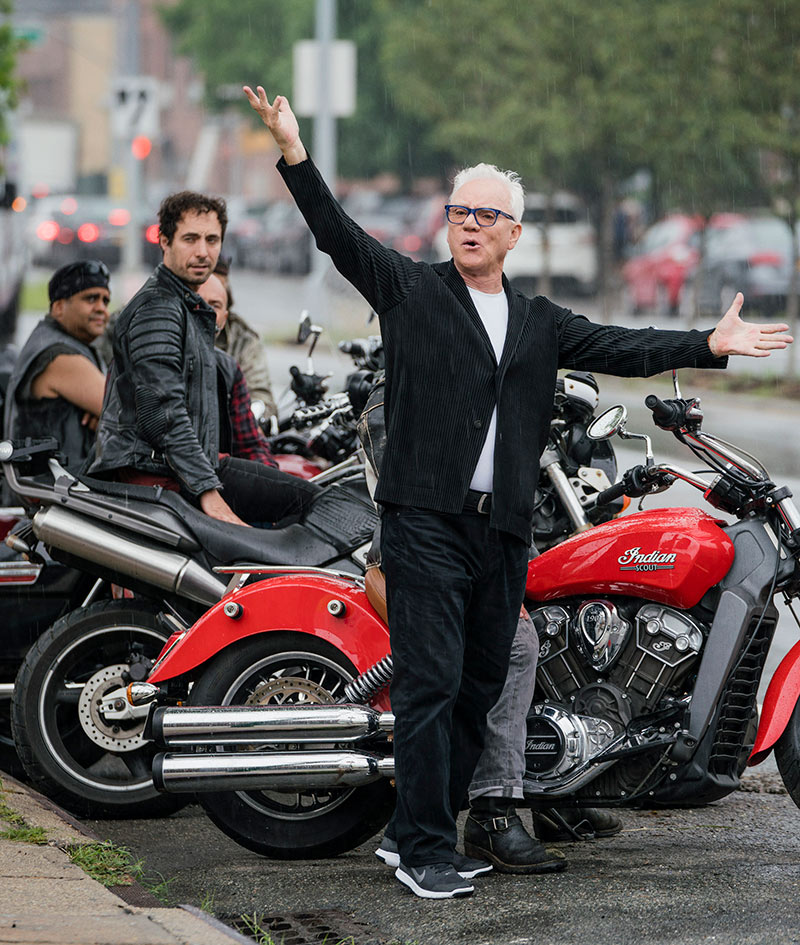 "I love working with Bernadette. We’re great friends. We get on very well, and she’s adorable, of course. I’m very lucky."

The storied actor can currently be seen in Amazon’s comedy-drama series Mozart in the Jungle, which also stars Lola Kirke, Gael Garcia Bernal and Bernadette Peters. Season four is scheduled for release on February 16, 2018, on Prime Video.

Melissa Parker (Smashing Interviews Magazine): Malcolm, please tell me about Mozart in the Jungle for those who have not seen the series and why it’s binge-watchable.

Malcolm McDowell: Well, listen, I’m not advising binge-watching, but I defy you to see one only because I think it’s a very well-written show with great characters. It’s basically about an orchestra and peeking behind the façade of what happens. An orchestra has not only got, I don’t know, 40-odd musicians, but everything else behind it, the running of it, the running of the building, the funding and all the rest of it, so it takes a lot, you know. As they say, it takes a village. Well, it takes a whole town, maybe a city, to run an orchestra. The hook to hang our hats lies in that.

Then our main character, played by Gael Garcia Bernal, is Rodrigo De Souza who is this young conductor that’s been brought in, and he has usurped my character who has been kicked upstairs to the board. In season four, my character (Thomas Pembridge) has decided to quit because he’s been offered to be the conductor of a small and avant-garde orchestra in Queens. He’s off to do that, and various shenanigans go on there. So Rodrigo (played by Gael) and my character have swapped places because it was Thomas who was in charge of the big orchestra and the running of it, and now Rodrigo De Souza has that responsibility. Thomas is now doing the avant-garde orchestra, so they’ve kind of swapped positions. That’s what’s happening this year.

Melissa Parker (Smashing Interviews Magazine): Would you describe your character (Thomas Pembridge) as a narcissist?

Malcolm McDowell: Yes. I would call him a definite narcissist because he was a child prodigy, a very talented musician and conductor at an early age. Everyone called him “Maestro” and have always lauded his performances and his interpretations of this, that and the other, and I think people in that position tend to believe it, you know, that you’re a little bit breathing rarefied air.

I think this year he’s beginning to find a little humility maybe in that he has fallen in love with Bernadette’s character, Gloria Windsor, and they are having a great time. In their affair, which is on and off, it’s sometimes fantastic and other times a little rocky just like all relationships.

Melissa Parker (Smashing Interviews Magazine): I like that relationship.

Melissa Parker (Smashing Interviews Magazine): Do you do any improvising or strictly stick to the script?

Malcolm McDowell: I do a bit here and there. But let’s face it. We’ve got very good scripts. Sometimes, you feel you can improve it a little bit, and I find it hard not to. But, yeah, you can improvise a bit, but the core of it has to be there, and it is. We have great scripts.

Melissa Parker (Smashing Interviews Magazine): You’ve been in several psychological thrillers and are well known for sort of the darker villainous roles in film, so do you enjoy this mixture of comedy and drama in Mozart in the Jungle, and is there a different approach as an actor for this genre?

Malcolm McDowell: Listen, it’s a nice change of pace. It’s so much fun for me to do these comedic parts, and it’s not just comedy. Comedy is just telling the truth. It’s the situation really that’s comedic. So really, it’s just finding the timing of that, which is where the laughs are. But to be honest with you, it wouldn’t be much fun, I don’t think, playing serial killers every week. That would be a little tough. So to do a part like this is so refreshing for me because in movies, I’m always asked to play the heavy, and they give you sick scenes to make everybody hate you. This way, it’s a little bit more refreshing and more fun to be able to just relax a bit more and to just go for it and go for the comedy. I enjoy it very much, but I also enjoy playing heavies, too, because they’re also fun in their way.

Melissa Parker (Smashing Interviews Magazine): Would you say that you had a calling to become an actor?

Malcolm McDowell: I would have to say “Yes” because I remember when I was a young actor, and my father tried to get me to give it up because nothing had happened in the first two years, which is nothing. But the thing is, all real actors know that things have to run their course, and you’re only ever one phone call away from the part that will change your life. That was certainly true in my case.

I was talking to somebody earlier about my relationship with an actor called David Warner who’s a great friend of mine I met in Stratford in 1965. He was a big star, and I was playing tiny parts. Then 10 years later, we met again in Hollywood where we played against each other. I was the hero, and he was the villain. But we’ve always stayed great friends, and that’s one of the great treasures and benefits of this business that I’m in, that you can have these great friendships with people through the years, and it has been a lot of years now. They’re racking up quickly. Fast.

Melissa Parker (Smashing Interviews Magazine): Speaking of your longevity in show business, could you pick one or two roles that are the most memorable for you?

Malcolm McDowell: I tell you. The most interesting role for me always is the next one. I’m not the kind of person that looks back on what I’ve done. It’s on to the next, and I think that’s more where I am. But of course, I’ve played these iconic parts like in A Clockwork Orange and the movies I did with Lindsay Anderson, if…. and O Lucky Man! Some of the movies I did in Russia I’m particularly fond of. Those are very interesting psychologically, and something you would never normally be asked to play in the West.

I honestly think that this part over a four or five-year period is also one of my favorites. I love Thomas Pembridge, so it’s got to be up there also.