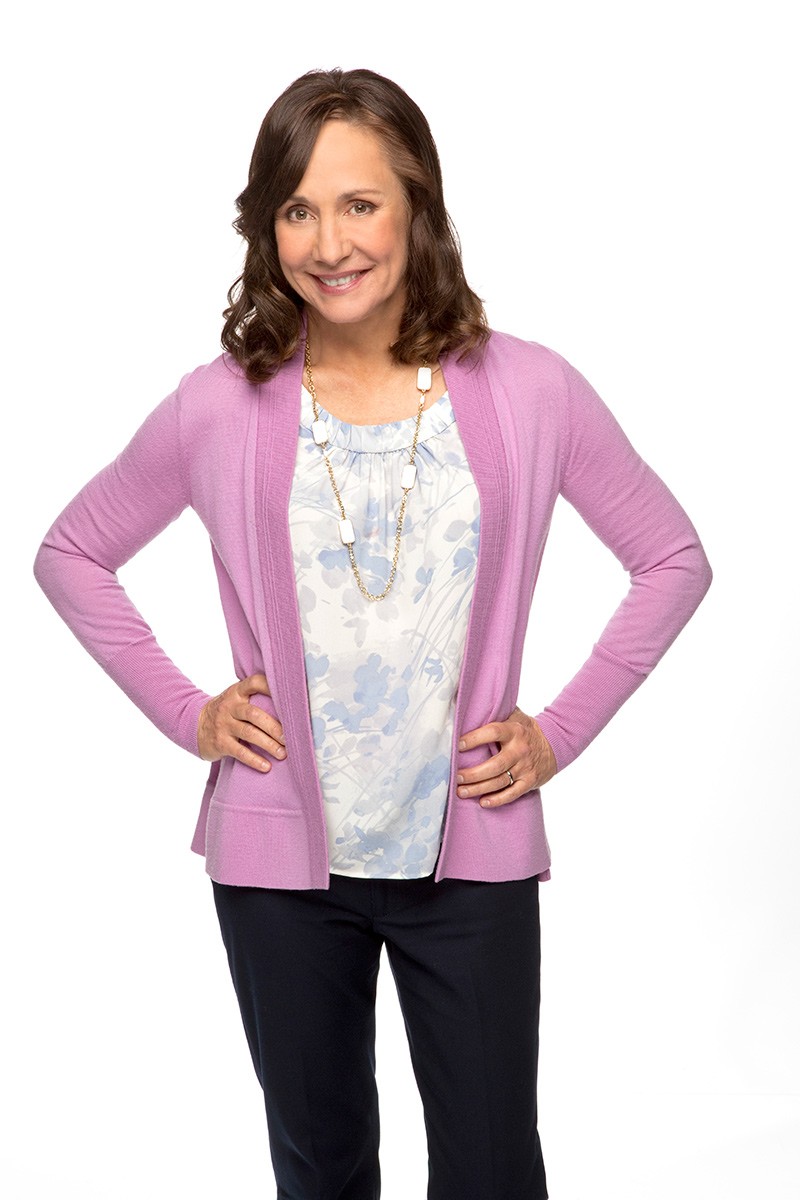 On stage, Metcalf has appeared in November, Voice Lessons, Brighton Beach Memoirs, Broadway Bound, Detroit, Long Day’s Journey into Night and earned a Tony nomination for The Other Place in 2013, starring with her real-life daughter Zoe Perry, and performed with Jeff Goldblum that same year in Domesticated.

"I like the fact that there are six co-leads on the show, so everything is really evenly divided, but it’s Ronny’s show because most everything is seen through his eyes. I love talking about acting with Tyler, but as far as advice or anything, I’ve got to focus on myself, making my own self work (laughs)."

Metcalf can currently be seen in the new CBS comedy The McCarthys which premieres October 30, 2014, and on the HBO series Getting On which begins its second season in November.

Melissa Parker (Smashing Interviews Magazine): Laurie, tell me about your character (Marjorie McCarthy) and how she interacts with her family on The McCarthys.

Laurie Metcalf: Well, she has four grown kids, and she keeps a very close watch on them. She’s a passive-aggressive type of a mom figure, which makes for entertainment I think (laughs). Marjorie isn’t shy about playing favorites. She’s closest to her son, Ronny, and they have bonded over watching procedural crime dramas together. The rest of the family is totally into sports, but Marjorie and Ronny have their own little weird mother-son cult going on.

Melissa Parker (Smashing Interviews Magazine): Ronny is openly gay, so is that something the family embraces?

Laurie Metcalf: The family has embraced him and his sexuality, but as far as a topic on the show, it’s sort of a non-issue. There are shows about Ronny dating, but the reasons his dates seem to fall apart for him have nothing to do with that as much as the guys that he’s choosing to date don’t fit in with the family, or the family is afraid of Ronny leaving. The homosexuality is a topic in the show, but it’s certainly not the main topic in any of the episodes, which is nice. It’s kind of refreshing.

Laurie Metcalf: Yeah I know. I know. He sure does.

Melissa Parker (Smashing Interviews Magazine): I believe this is his first role as a regular on a TV series, so has he asked you for advice?

Laurie Metcalf: No. We all bonded very quickly, and it’s a great group. I like the fact that there are six co-leads on the show, so everything is really evenly divided, but it’s Ronny’s show because most everything is seen through his eyes. I love talking about acting with Tyler, but as far as advice or anything, I’ve got to focus on myself, making my own self work (laughs).

Laurie Metcalf: He did an episode where he was hosting the high school sports awards ceremony. He was excellent, and I hope that he’s back. He definitely could be, so I hope they left that open for him. John fits perfectly into the mix.

Melissa Parker (Smashing Interviews Magazine): Getting On will be starting season two in November. Your character (Dr. Jenna James) did a fecal study in season one (laughs). Anything unusual going on next season?

Laurie Metcalf: (laughs) I go over a little overboard in season two with my mice experiments. There’s a running theme with me and my mice.

Melissa Parker (Smashing Interviews Magazine): I understand you have an on-screen kiss with Betty Buckley.

Laurie Metcalf: Yes we do.

Melissa Parker (Smashing Interviews Magazine): How did that go?

Laurie Metcalf: That was a first for both of us. I love the way the writers wrote it. It’s very unexpected. It’s sort of a metaphor for the whole show. Getting On walks a very fine line between comedy and drama, so the kiss itself falls right on that line the way that it happened.

It’s unexpected, and sometimes that can be funny. It’s also heartfelt from Betty’s character because she wants any kind of connection to somebody, and in the moment, that’s how it comes out. It’s sudden and odd and touching and funny all at the same time, which is what the show is about.

Melissa Parker (Smashing Interviews Magazine): You were raised in Edwardsville, Illinois, and have said that city “isn’t anywhere near a theatre,” so what led you to acting?

Laurie Metcalf: I did a couple of shows in high school and loved doing that, but thought, “I’ll never be able to make a living at this, so I’d better get practical here.” When I went to Illinois State University, I bounced around with a couple of different majors, and then got into a play, and it just snowballed from there because I happened to get in with a group of people who wanted to form a company (Steppenwolf Theatre Company). It was going to last for a summer, and then it was going to last for a little season.

We weren’t paying ourselves. We were just doing day jobs. It just had this weird snowball effect. It was just a fluke and good luck for me because I don’t think that I would have ever pursued it on my own. As a member of a group, I felt more comfortable attempting it, and it was a huge deal when I was able to quit my secretary job and just live off my acting work. It’s a hard field to make a living in for most working actors. There just aren’t enough roles to go around.

I found myself very lucky, and the group was like a springboard. I got better and learned so much when we were doing just play after play after play basically for ourselves. We all got better, and slowly we began to creep out into films and television, but most of us kept coming back to the theatre. I basically spent the last five or six years just doing theatre.

Melissa Parker (Smashing Interviews Magazine): It has been over twenty-five years since Roseanne debuted on television. You and Roseanne (Barr)  had such great on-screen chemistry, but actors really have no control over that, do they?

Laurie Metcalf: Well, I don’t know how you cast for chemistry. I’m sure casting directors and producers around the world would pay a lot of money to know the answer to that. I think it happens when the actors have a mutual respect for each other. That can go a long way into making it look like they either, in the Roseanne case, have grown up together, or they just enjoy working together.

From the first time I met Roseanne, and I barely knew her standup work, I had such respect for her intelligence and her drive. She built her own path by herself, coming up as a comedy act and going around places like Salt Lake City, of all places, to get better, ending up on Carson and all that. She worked her ass off to get there and earned a great TV show out of it.

Laurie Metcalf: I hope so! I never know until they call me. It seems like I do about one a season maybe, so hopefully, it’s getting around that time. I love to work on that set. It’s a great, fun set to be on. They all work very hard and take it very seriously which I like.

Laurie Metcalf: Yeah and whose son is only into science (laughs).

Melissa Parker (Smashing Interviews Magazine): Do you prepare for certain roles differently than others depending solely on the character types?

Laurie Metcalf: The first thing I do, if it’s about a subject I don’t know and that my character knows, is do research. I just did a play in New York, and my role was a scientist studying Alzheimer’s, so I researched that. My character ended up developing early onset Alzheimer’s, so I tried to research some of the early stages and how I could communicate that. I did Long Day’s Journey in London a couple of years ago, and that was the morphine addiction. My job there was to modulate a person who was addicted to morphine and how it would effect them during a twelve-hour span because the play takes place in twelve hours, so it was really technical that way. I do the technical stuff as much as I can.

Each role is different in that sense, what it’s dealing with specifically. If you have to do an accent, there’s work involved in that, too. Other than that, I just rely on imagination I would say and try different things out in the rehearsal room. In a play, you have three weeks of rehearsal, and in television, you have four days in these multi-camera shows. In a movie, you might have none, so a lot of it is just imagination, taking clues from the script and also getting feedback from your director as to what’s working and what doesn’t work.

Laurie Metcalf: And fingers crossed about both of them that they will have more episodes added to them. The McCarthys premieres October 30 and Getting On the week after. They’re both a half hour long, but they’re extremely different from each other, and I love doing both of them for different reasons. I just would love to see them both continue. I didn’t expect to find myself back on TV because I’d been doing so much theatre, and then to have two shows is just ridiculous! I couldn’t be luckier right now.