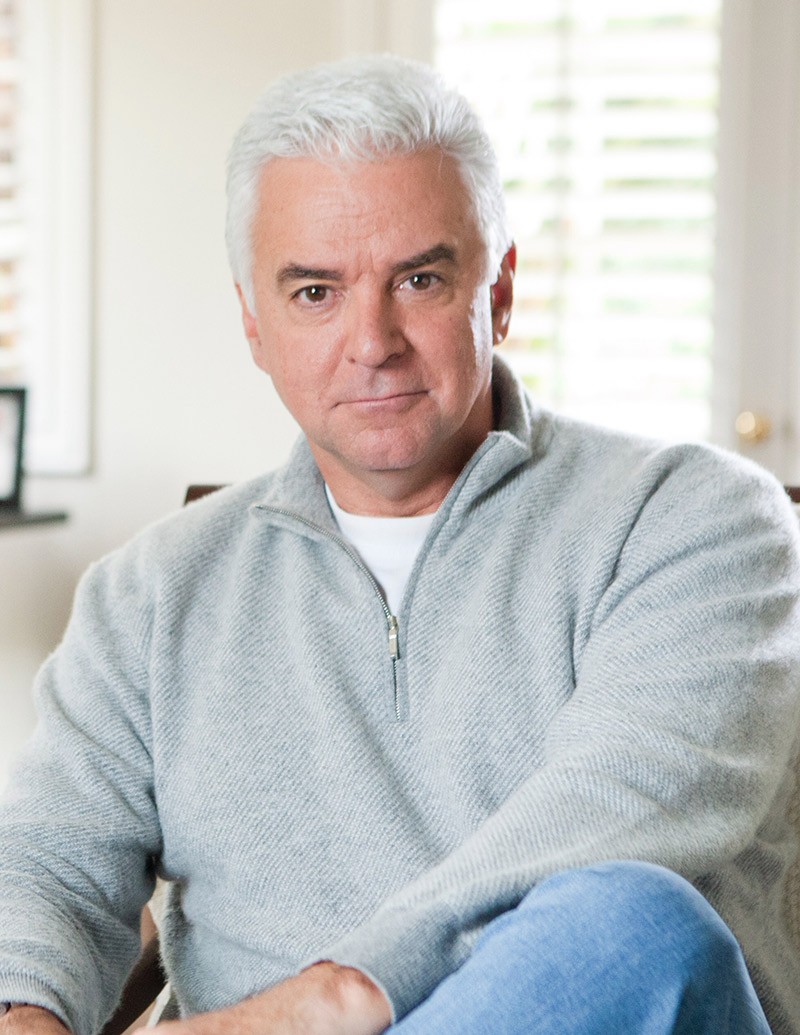 John O’Hurley is a veteran of the theatre, a film and television actor, game show host, classically-trained vocalist, self-taught pianist and New York Times bestselling author. The multi-talent is perhaps best known for his recurring role as J. Peterman on Seinfeld, as the host of Family Feud from 2006 to 2010 and the host of The National Dog Show on NBC since 2002. He has starred in Chicago on Broadway and voiced characters across a plethora of animated series, including King Neptune on SpongeBob SquarePants.

O’Hurley, with dance partner Charlotte Jorgensen, lost in the final competition in the first season of Dancing with the Stars to Kelly Monaco and Alex Mazo, but the network announced the four would face off in a special “grudge match” episode where viewers would solely determine the outcome. O’Hurley and Jorgensen emerged as the winners on September 20, 2005.

Swing Away, a comedy/drama released in theaters March 10, 2017, stars O’Hurley, Shannon Elizabeth, Kari Theobald and Manos Gavras. The film is about a professional golfer, who following a meltdown that leads to a suspension, travels to her grandparents’ village in Greece to escape the harsh spotlight of the international sports world. She meets and mentors a ten-year-old girl, and along the way, rediscovers her Greek heritage, her love of the game and the hidden strength within herself as she inspires the townspeople in an epic showdown against a greedy American developer.

Melissa Parker (Smashing Interviews Magazine): John, your character in Swing Away is described as a greedy American developer. Does he have any redeemable qualities?

John O’Hurley: Absolutely none. Thank you for pointing that out. And, that is intentional and cherished. One of the attractive things about this script was that I got to participate in the sculpting of the character right on down to most of the lines being … basically, it’s an improvisation. I’d say to the director, “Look. I know this character better than you can write it, so just back off and let me talk.” (laughs) He’s just a Type A personality and makes no apologies for himself or his spirit or lack of spirit (laughs).

Melissa Parker (Smashing Interviews Magazine): It has been said also that you are “channeling” Donald Trump through this character. So, was that the president or the businessman?

John O’Hurley: It’s the businessman. I know Donald and have known him for many years, so I would tell him that to his face. It has nothing to do with the presidency. It has more to do with he is a ruthless dealer. He really is and that’s been the key to his success. I would say it’s more of a caricature of what he is. But, I like Donald very much, and he’s a very sweet man face-to-face. He has the charm that I do not get with this character. So, it’s really about his business savvy. But, it’s the beauty of it too, and it gives a nice contrast to the other characters.

This is a wonderful, kind of Hallmark family film that really has a wonderful, redemptive message to it, that no matter what happens to you in life, all things are redeemable. Of course, the scenery and everything, being in Greece, couldn’t be more beautiful, more pastoral and more meaningful. I’ve watched four screenings of this film, and I never watch myself do anything. My eyes still well up at the end of it while I watch it.

Melissa Parker (Smashing Interviews Magazine): Were you already familiar with Greece and the Greek culture?

John O’Hurley: No. I had no idea where I was going or what I was doing. Because I had no expectations, I just kind of took every moment as it came at me, and I walked away with a heightened respect for the Greek Isles because they should be on everybody’s bucket list to see. There were some of the most beautiful vistas. The topography is just so inspiring and relaxing, and at the same time, the Greek culture is absolutely wonderful to just absorb and be in the middle of.

Melissa Parker (Smashing Interviews Magazine): Is Swing Away as much about the relationships between the characters as it is about golf?

John O’Hurley: Absolutely, yeah. Golf is really the backdrop of this. It’s really about community pride, kind of redeeming shame and mentoring. It’s got so many wonderful positive things to it. Golf is just kind of the backdrop. Golf is better when it’s looked at as a piece of poetry, rather than a life or death sport because it isn’t. It’s a game.

Now, at one point, I do play a little ten-year-old girl for a match, the stakes of which are the golf course and the development. But, my character is the type of character that would do that.

Melissa Parker (Smashing Interviews Magazine): Did you do some of the golf stunts yourself?

John O’Hurley: She did all of her own stunts. She has actually a very nice swing, and that was one of the criteria for that role. She had to put herself on tape so they could see her swing. She absorbed the internal quality of the character very nicely.

Melissa Parker (Smashing Interviews Magazine): I understand your father taught you how to play. Did you ever want to be a professional golfer?

John O’Hurley: All my life, I was an actor. From the age of three, I knew exactly what I was going to be. So, golf will always be a game for me, but it was my game. It was the thing I played competitively in high school and college. But, that was my game, my sport. It was never something that I felt good enough to play professionally. Now, there were moments when I was on a golf course where I thought I was as good as any pro, but those were fleeting and far between (laughs).

Melissa Parker (Smashing Interviews Magazine): So, you were very sure at a young age that acting was your calling, so to speak?

John O’Hurley: At the age of three. When someone would ask me what I wanted to be when I grew up, I would, with a sense of disgust that only a three-year-old can muster, put my hands on my hips, point to the black and white TV in the corner of the room and say, “Well, I am an actor, so that’s what I’m gonna be.”

Melissa Parker (Smashing Interviews Magazine): I suppose the last time I saw you on television was Devious Maids, and you were hysterically funny!

John O’Hurley: I love Susan (Lucci). That was our fourth time being paired together either as husband and wife or as lovers. Gosh, we’ve done everything together. I love working with her.

Melissa Parker (Smashing Interviews Magazine): You began your career on The Edge of Night?

John O’Hurley: I actually started off more in the musical area. I did a little bit of opera in New York, then went to Broadway, and from Broadway to daytime. Once I found daytime, I realized that if I moved out to the west coast, I could take the decimal point and move it over one. That was a big move for me. I’ve been out here ever since, although I go back because I’m on Broadway all the time.

I’ll be back doing my one-man show there at the Carlyle. I’ll be opening on March 28 at the Café Carlyle in New York and I’ll be there through April 8. It’s my one-man show called A Man with Standards. I talk a little bit about growing up in the shadow of the Great American Songbook and my parents going out for dinner and dancing every Saturday night at supper clubs. It was another period in American culture.

Melissa Parker (Smashing Interviews Magazine): How do you feel being forever known as J. Peterman, Elaine’s inane boss on Seinfeld?

John O’Hurley: You know, listen. I’ve been lucky enough to put my fingers through the belt loops of some fabulous brands, including Seinfeld, Family Feud, Dancing with the Stars and this national dog show that I do. I’ve been really lucky. An actor’s biggest obligation as they get older is to wake up every day and try to stay relevant, and I’ve been lucky enough to have been afforded many opportunities to do that.

Melissa Parker (Smashing Interviews Magazine): You are on the very distinguished list of Ellis Island Medal of Honor recipients. What is that exactly?

John O’Hurley: They have a huge ceremony out on Ellis Island. It’s quite a spectacle out there, and they have a certain number of people that are nominated each year for their work. In my case, it was for arts and philanthropy and the money that I’ve raised. I got the Medal of Honor for that. I’m very proud of it. I’m sitting here looking at it in my office right now.

Melissa Parker (Smashing Interviews Magazine): What else is going on, John?

John O’Hurley: We just recorded the Beverly Hills Dog Show to go along with the national one we do on thanksgiving Day. We taped it, and we’ll be airing it Easter Sunday evening at 8:00 on USA network and then, showing again on NBC. This is going to be a dog show done differently. I had a chance to be a part of the redesign of the show in terms of what a dog show looks like, and I got the Best in Show arena that looks more like a Victoria’s Secret runway now. We’ve upped it a notch.

Melissa Parker (Smashing Interviews Magazine): So, actor, singer, television host. What has been your favorite job?

John O’Hurley: I love this one-man show because it’s so cathartic for me, and it’s always changing, always evolving. I also write books and I compose music. I probably like those two the best because what I write is what I write in my head, and the music I compose are the melodies that I hear in my head. So, because they’re so intensely personal, I would wrap my arms around those as probably my favorite moments of my career.