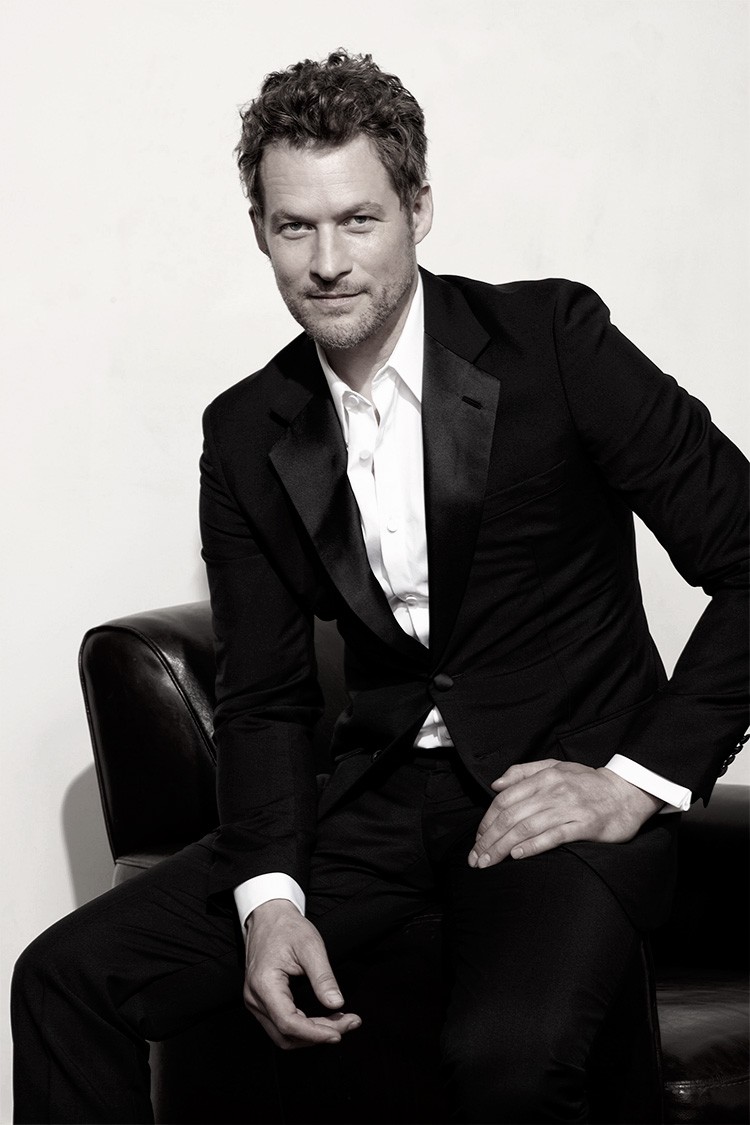 Directed by Gabriele Muccino, the film follows a former professional athlete with a weak past who tries to redeem himself by coaching his son’s soccer team, only to find he is unable to resist his players’ gorgeous moms.

"I think probably every actor would answer that with they’d like to do film. Television has become quite amazing for many people with HBO and Showtime and all those great channels. I am attracted to that."

Tupper is no stranger to films, starring opposite Jim Carrey in Mr. Popper’s Penguins and opposite Zac Efron and Claire Danes in Me and Orson Welles. He is also known for his roles on the small screen in NBC’s medical drama Mercy, ABC’s Men in Trees, Samantha Who, Grey’s Anatomy and can currently be seen as David Clarke, the father of the main character in the drama series Revenge which airs Sunday nights at 9:00 eastern.

The handsome actor and actress Anne Heche have two sons Homer and Atlas.

James Tupper: Is this Smashing Pumpkin?

Melissa Parker (Smashing Interviews Magazine): You know, I did a recent interview with Anne (Heche).

James Tupper: Oh, did you? Did she say good things about me?

James Tupper: Oh, really? That’s very funny (laughs). She was on The Talk, and I was going to do this thing, and we were both talking about each other. When we finished, I watched The Talk, and it was really hilarious. I was saying the same things about her (laughs).

Melissa Parker (Smashing Interviews Magazine): Do you two confer on stories before interviews or appearances?

James Tupper: No, hell no. The rule of thumb is to just say whatever you want to say. Just make sure it’s truthful. That’s about it. I always thought that when you were interviewed, it would be tightly controlled. But I’m walking down the street in New York, just had an interview with a director I really like and now I’m calling you (laughs).

Melissa Parker (Smashing Interviews Magazine): How did you get involved in the project?

James Tupper: Well, you know what? It was really easy. I just auditioned for it. I liked the story, then I got a call to go to Shreveport, Louisiana, and we shot it there. It’s beautiful. Have you been there?

James Tupper: It’s fantastic. We fell in love with it. Anyway, in the movie I become Jessica Biel’s fiancée, and we are about to get married.

James Tupper: We had to reshoot it several times, and I was going, “Yeah, let’s reshoot because no one’s ever going to believe she’s going to leave you to go with me!” He thought that was funny. We had a really great relationship. He’s a Scottish guy, you know?

I think a lot of parents will relate to the film … the drama of the modern family at a soccer game. That’s what it’s about, really. It’s a divorced couple, and the father is the coach. I’m going to marry the girl, so I have my own relationship with the kid. Did you ever see The Pursuit of Happyness?

James Tupper: Just a fantastic film. Gabriele Muccino really wanted to deal with the effect of poverty on children. The kid was living on the street. I think in this film Gabriele really wanted to deal with divorce and the effect it has on children and how families cope. He just didn’t shy away from any of it. If it had been a different director, he might’ve said, “Don’t make Matt too likeable. Have the audience root for Jessica Biel and Gerard Butler.” But it wasn’t that.

Gabriele said, “James, whatever you’ve got, bring it because I want this to be as complicated as life. Butler’s character starts having all these affairs with the mothers at the soccer field, which is also probably a much talked about fact of American life, don’t you think? (laughs) I’ve never done it personally, but that happens.

The cool thing for me is that I’m just an actor that has been fortunate to work with all these people. The first day on set, Una Thurman was there. I just thought she was wonderful and Dennis Quaid also. It’s a really terrific cast.

James Tupper: I think probably every actor would answer that with they’d like to do film. Television has become quite amazing for many people with HBO and Showtime and all those great channels. I am attracted to that. I’m in New York right now working on a new Jerry Bruckheimer pilot called The Secret Lives of Husbands and Wives. Mark Pellington is directing it, and I’m like, “Wow, the level of talent they’ve been able to get to come to TV is really fun.”

Melissa Parker (Smashing Interviews Magazine): I understand the pilot is based on a book.

James Tupper: Yeah, it is, and it’s drawn in that complicated way. The characters are really interesting. When we got to set, for instance, we got a ten page handout of the backstory for your character. That’s usually something an actor will just make up. But it says you went to college and you did this and that, how often you go to church, what you believe, all of it. It’s really funny.

Melissa Parker (Smashing Interviews Magazine): Jerry Bruckheimer is one of the most successful film and television producers in history.

James Tupper: I looked him up on IMDB, and he has done almost 1,500 episodes of television. He is in a handful of people who have accomplished that. That’s incredible.

Melissa Parker (Smashing Interviews Magazine): James, did you become interested in acting at a young age?

James Tupper: I grew up in the middle of nowhere outside of Halifax, Nova Scotia. There are no actors in my family nor did I have friends in acting. It was just something I was born with and really wanted to do. Every time my life veered away from it, I was like, “No. I don’t want to give that up.”

My parents told me that at an early age I was in the middle of the living room floor doing mime, walking funny and doing accents … just trying to entertain people (laughs). My father is nothing like that and neither is my mother. Go figure.

Melissa Parker (Smashing Interviews Magazine): Was part of the time you veered away from acting spent on a coffee farm in Africa?

James Tupper: Yeah (laughs). That’s just a funny side thing that I did for a few months when I was young. But I went to drama school and worked as a carpenter to support myself when I tried to get work. It’s pretty competitive, but I feel excited to be where I am now. Like, wow … there’s Dennis Quaid standing there (laughs).

James Tupper: Yes, thank you so much (laughs). That’s a learning curve because never sign on to play a character where it says, “Handsome, fun loving … dead.” I’m dead. Hard to build a storyline there.

Melissa Parker (Smashing Interviews Magazine): The Internet rumor is that David Clarke is still alive, so perhaps that will turn out to be true.

James Tupper: I hope so. Can you call them and ask them? It’s a great show, and I love being a part of it. I am on this season, by the way … quite dead.

James Tupper: I think that’s finished. I just did a seven-episode arc on that in the seventh season. That was fun. My plate is pretty full because of this Bruckheimer show, Revenge, and this film. That’s it. That’s all I can do, actually (laughs). I’d like to take a two-week vacation somewhere (laughs).

Melissa Parker (Smashing Interviews Magazine): What do you, Anne and the kids enjoy on family fun days?

James Tupper: Bizarrely, we moved to this neighborhood, and after about a year, we found out that all these people were always walking in one direction. We went down and found this little tennis club that’s about a hundred and twenty years old and said, “We want to join!” Anne and I had never played, so at my age anybody I play with just clobbers me.

Our son started playing, so it’s a family thing. We’d go there, and our three year old would swing in the air and miss the ball every time, and our ten year old started scooping it up and hitting it. A few weeks ago, he won the Novice Division Club Championship! He had a big match in front of a bunch of people. Homer became a champion and won.

James Tupper: Yes, maybe that’s what it is, reflexes.

James Tupper: I’ve got to get that weekend in Bora Bora with a Mai Tai. I really want to have twin girls … don’t tell Anne.

James Tupper: Twin baby girls (laughs). It might be too late for me, but I’d love to play in the U.S. Open. It might not happen because I’m terrible at tennis. I’d love to be the lead in a film like a Harrison Ford style type thing. That would be fun.

I think one item on my bucket list is going to get checked off because I wanted to do a play up in Williamstown during the summer festival, and we’re trying to work it out for this summer. That will be one off the bucket list. I’ve got to go to Japan. My bucket list is growing (laughs).

Melissa Parker (Smashing Interviews Magazine): Well, here’s hoping that everything gets checked off! And good luck on the pilot …

James Tupper: Hey, thanks! Thanks so much. That’s really sweet.

« Tom Kenny and SpongeBob SquarePants Interview: "Don't Be a Jerk (It's Christmas)"
Parker Stevenson Interview: Life Through the Looking Glass »