Griffin Dunne Interview: On "The Discoverers," "After Hours," Madonna and His Famous Father 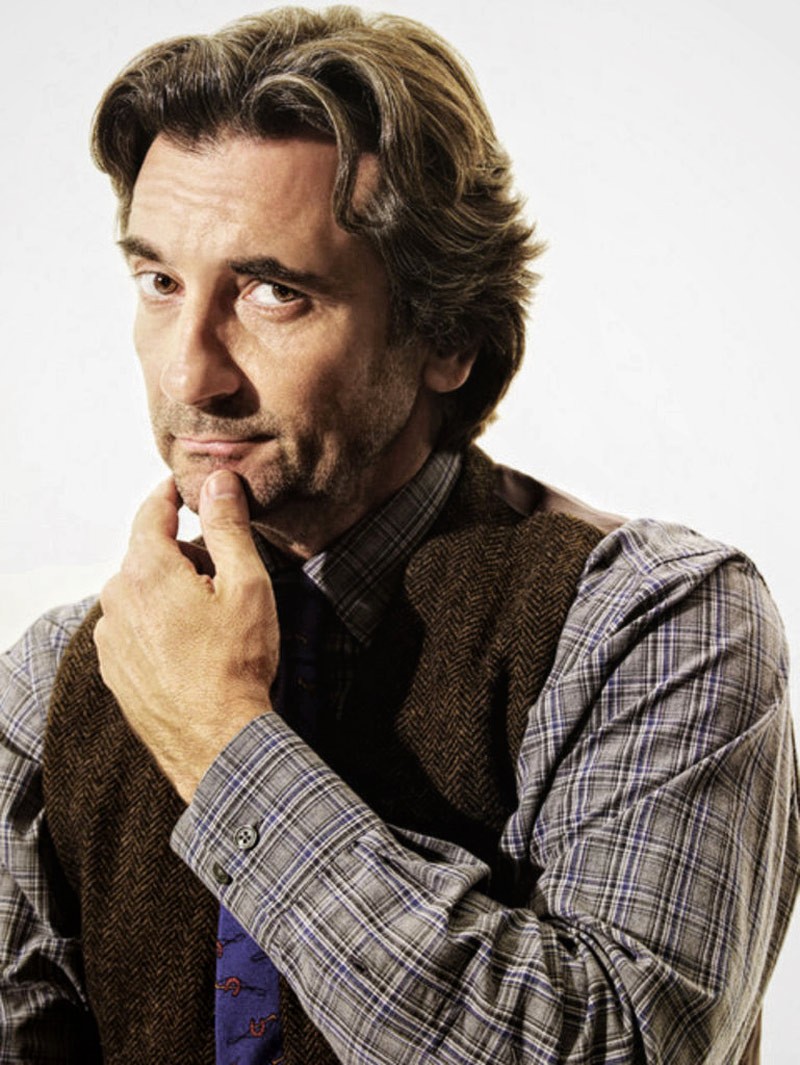 The son of legendary producer, actor, writer Dominick Dunne, Griffin Dunne may be best known for his iconic performances in the cult classics After Hours and An American Werewolf in London. An Oscar, Emmy and Golden Globe nominee for his acting achievements, Dunne is also an accomplished filmmaker and producer with credits including Running on Empty, Addicted to Love and Practical Magic.

Dunne’s latest film, The Discoverers, marks something of a feature film comeback performance and one for which he has already won several awards throughout the film’s festival run including Sarasota International Film Festival’s Achievement in Acting Award and Sedona International Film Festival’s Outstanding Actor Award. The film also stars Madeleine Martin (Californication), Devon Graye (Dexter) and Stuart Margolin (The Rockford Files) and opens May 16, 2014.

"I play the central character, Lewis Birch, who is a history teacher in a very low level college and has to supplement his income with a job as a night security guard. He is recently divorced and has written a dissertation about Lewis and Clark which is sort of his passion. While going to deliver a speech which Birch hopes will stimulate sales of a book he has written (that no one will probably read), he ends up taking his two kids on a historical reenactment trek."

The New York native lost his sister, Dominique Dunne, when she was strangled by her former boyfriend in 1982. After the tragedy, their mother founded the victims’ rights organization Justice for Homicide Victims. Dunne is also the nephew of novelist, screenwriter, literary critic John Gregory Dunne and novelist, essayist Joan Didion.

Melissa Parker (Smashing Interviews Magazine): Let’s talk first about The Discoverers. This was shot a couple of years ago?

Griffin Dunne: Yeah. God yeah. That has really become not unusual lately. It does a festival circuit picking up awards, and then they get enough dough to get it distributed. I see that happening more and more often.

Melissa Parker (Smashing Interviews Magazine): Would you say it’s basically about a dysfunctional family who hits the road in search of answers?

Griffin Dunne: I would. I play the central character, Lewis Birch, who is a history teacher in a very low level college and has to supplement his income with a job as a night security guard. He is recently divorced and has written a dissertation about Lewis and Clark which is sort of his passion. While going to deliver a speech which Birch hopes will stimulate sales of a book he has written (that no one will probably read), he ends up taking his two kids on a historical reenactment trek.

His father is dressed in buckskins, and the whole family ends up on a reenactment tour on the Oregon Trail instead of going to deliver his dissertation at a university. It’s about the family discovering each other and Lewis Birch rediscovering what’s important in life and finding his passion again. He is a pretty depressed, down and out guy at the beginning of the film, but my character goes through a journey of discovering himself.

Griffin Dunne: I love her, too. We had a lot of laughs on this. I loved having her play my daughter, and we had lots of fun. I think she was one of my favorites in this film.

Griffin Dunne: Yes she does. She asks the sort of challenging question in the beginning when I’m teaching my class, and she continues to be a challenging question child (laughs). So it was a little bit of typecasting. Hannah’s on a TV series that Amazon is doing called Mozart in the Jungle. They start shooting the whole series in September. I’m very proud of her.

Melissa Parker (Smashing Interviews Magazine): Is a major difference in filmmaking now and in the 1980s the fact that independent films were not that prominent back then?

Griffin Dunne: Well, it was the beginning of distributors specializing in independent films. I think the biggest difference is there are many more films being made for a lot less money and a lot less theaters to show them in. It’s becoming more and more challenging for independent movies to find an audience. It’s always the good news and the bad news kind of a thing. You have to really invent and be very creative about how you get your movie out.

In the 80s, you pretty much had a guarantee that if you filmed the movie, even if they dumped it, you would still get a release. It would still come out, and you’d still do press. But now it’s very hand to mouth and very do it yourself even in the distribution and marketing departments. The publicity and marketing people are almost interchangeable. It doesn’t have that structure. In the 80s, there was an infrastructure for how to get your movie out. Now it’s sort of finding its way. It’s still an evolutionary process.

Melissa Parker (Smashing Interviews Magazine): And now there are platforms like Kickstarter for funding projects.

Griffin Dunne: Yes. You’ve got that as well.

Melissa Parker (Smashing Interviews Magazine): You have the distinction of being in two cult classics, An American Werewolf in London (1981) and After Hours (1985). Why does After Hours still have such a huge fan following all these years later?

Griffin Dunne: I think it’s because it has almost become an adjective for having just a terrible night that gets worse and worse and worse. The comedic dread of one catastrophe piled on another is something that resonates with people. People think it’s bad being stuck in traffic, but then they get out and their car is stolen, and they get a ticket for the car that was stolen, and they have to go to the judge. It’s just all of these events that keep happening to the character I played. It still carries on, but with cell phones, it’s a little tougher to be stuck downtown unable to get uptown. I think the idea of leaving your apartment to go meet a pretty girl and having everything go completely haywire is a pretty common experience.

Melissa Parker (Smashing Interviews Magazine): Was Madonna difficult to work with in Who’s That Girl (1987)?

Griffin Dunne: No, not at all. She was very funny. We actually had a lot of laughs making that movie. She was just enormously famous. I think all of our scenes that were shot outdoors had to be re-recorded because the sky was just filled with helicopters, and photographers followed her everywhere she went. But she had a real sense of humor about it. She enjoyed all that, I thought, in a pretty healthy way.

Melissa Parker (Smashing Interviews Magazine): As a youngster, I imagine there were celebrities in and out of your home all the time. Was that when you caught the acting bug?

Griffin Dunne: Not really. It wasn’t until I was in high school. I had an acting teacher who really insisted on me auditioning for a play called The Zoo Story by Edward Albee. I thought I was going to become a journalist actually. That was what I was hoping to do, and this just totally took over. I knew the moment I did this play that was what I wanted to do. But growing up in a household where everybody was particularly in the movie business, I think a teenager’s journey is an obligation, at least in the beginning, to do the opposite.

Griffin Dunne: He was pretty great.

Melissa Parker (Smashing Interviews Magazine): Was he a mentor to you?

Griffin Dunne: We were very close, much moreso in what was my late teens. I admired him. He was a mentor to me in the way he reinvented himself and rose from the ashes of a really bad experience of being broke and newly sober and cast aside in Hollywood, coming to New York with very little and reinventing himself as a writer. I’ve never not been in awe of how he did that and that he did that. I think that’s why people loved him so much because he had such gratitude for having this incredible second act in his life.

Melissa Parker (Smashing Interviews Magazine): The tragic death of your sister must’ve changed your dad and your entire family.

Griffin Dunne: Yeah. It did. And it’s something that goes on and defines us whether we want it to or not, and it’s something that dad was very public about, and I was very private about. I attended the 30th anniversary of Justice for Homicide Victims that my mother started in honor of my sister. A man at the podium whose daughter was murdered had a heart attack in the middle of giving his speech. I was thinking of the irony of how I felt compelled to write about that, and that if I didn’t, no one else would know about it. Giving my speech that day, I was very aware of sort of channeling not just my father, but my father and my mother.

Melissa Parker (Smashing Interviews Magazine): Your mother must’ve been a very strong person also to have gone through something that horrible with multiple sclerosis.

Griffin Dunne: She was a remarkable woman.

Melissa Parker (Smashing Interviews Magazine): Your aunt, author and essayist Joan Didion, seems fascinating. Have there ever been plans to make a film of her life?

Griffin Dunne: I’ve been shooting a documentary over the last couple of years, so I couldn’t agree with you more. I took a crew to Washington, DC to shoot her getting the Arts & Humanities Award from President Obama. He said, “Well, I don’t know why this hasn’t happened before. It seems like this should’ve happened three presidents ago.” That sort of firmed it up for me. She got this incredible standing ovation. She has a very passionate following from people who have been very deeply affected by her words.

Griffin Dunne: Mania Days is being edited. It’s about two people who are bipolar, and it’s a very personal project to the writer/director who actually is bipolar and who has been struggling with that. I’ve been working quite a bit as an actor lately, so I’ve got two more I’m about to do that are coming up, and I think I may be directing a Good Wife, and then I’m working on this documentary.

Melissa Parker (Smashing Interviews Magazine): Would you rather be working behind or in front of the camera?

Griffin Dunne: Probably as an actor, but I try to avoid just being an actor for hire. The waiting around thing has never made me happy, so when I’m not working, I try to create work.

Melissa Parker (Smashing Interviews Magazine): Is there a role that you wanted and regret that you didn’t take?

Griffin Dunne: The fly character that Jeff Goldblum played so well. It had a great director in David Cronenberg. But I had done a big “makeup movie,” An American Werewolf in London, and I just couldn’t bear wearing all that makeup again. I always regretted it and always thought that wasn’t a good enough reason once I saw the movie of course.

Griffin Dunne: Yeah. I would’ve been great! I love that movie. Let that be my deepest regret (laughs).

« Della Reese Interview: Legendary Actress Returns to TV in Hallmark's "Signed, Sealed, Delivered"
Larry the Cable Guy Interview: "If You Don’t Like What Somebody Says, Don’t Hang Out with That Person" »