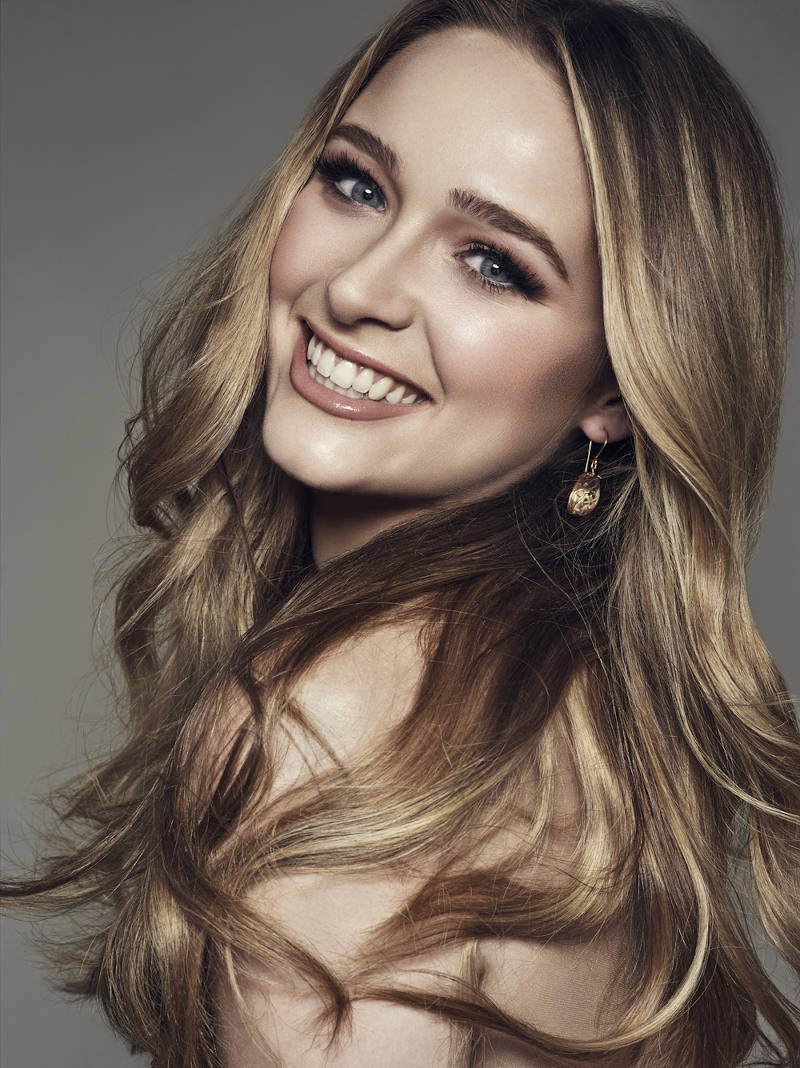 Greer Grammer was born on February 15, 1992, to actor Kelsey Grammer and make-up artist Barrie Buckner. She is best known for her role as Lissa Miller in the MTV series Awkward and for portraying Grace in the 2021 Netflix-released film Deadly Illusions (also starring Kristin Davis and Dermot Mulroney).

Grammer’s first acting role was as a guest star on an episode of the Nickelodeon teen series iCarly in 2010. Other TV appearances include Melissa & Joey, Cupcake Wars (as herself), Rush Hour, The Middle and The Goldbergs, and films, in addition to Deadly Illusions, are Chastity Bites, Life Partners, An Evergreen Christmas, The Last Summer and Roe v. Wade.

Smashing Interviews Magazine: Greer, how’s it going for you during the pandemic?

Greer Grammer: Oh, you know, it’s going. Every day brings some new challenges, but it feels like things are getting better here in California. It feels like life is starting to continue. But it’s been a year.

Smashing Interviews Magazine: I’ve seen a couple of media outlets call you the “Deadly Illusions breakout star.” How do you feel about that?

Greer Grammer: I feel like breakout star is always such a funny term because you never know. It’s so flattering like, “Oh, my God, they’re saying breakout star!” But I don’t know how to answer. I think it’s cool. I think it’s cool to see the press. I definitely don’t know if I feel myself like I’ve broken out. But I’m excited every time I get recognition. I’m just always hoping it will propel me into something else. But I don’t know. I don’t think I’m making any sense (laughs).

Smashing Interviews Magazine: Perhaps you’re saying that you have a tendency to be too critical of yourself?

Smashing Interviews Magazine: In Deadly Illusions, how did you feel about the sex scenes, and was there ever a discussion for you to do a nude scene?

Greer Grammer: No. I know Kristen (Davis) did a little bit of nudity at times very briefly. But part of the whole thing in this movie with Anna Elizabeth James, the director, was that we wanted to show that less is more. I am not someone who enjoys watching that, if I’m being honest, as far as watching nudity or watching graphic scenes. I think the world we live in now tries to shock you with sex and nudity. But it doesn’t do it anymore because it’s no longer shocking, and it’s never enjoyable for me to watch.

So in having that conversation, Anna was like, “I want to put a feminine aspect on showing sex scenes, and I want to show that you can still have graphic sex scenes and know what’s going on, but you don’t have to show all of the nudity.” It’s funny because I’d never really done sex scenes, obviously, so the most nude I ever get is that shot of my back that lasts for four seconds in Kristen’s fantasy world when she’s looking at me across the way in one of her meetings. There’s still a lot of sex scenes, but it never felt graphic or explicit even though you do kind of feel a little bit uncomfortable at times watching them.

There was never talk of me doing nudity. But it was very nerve-racking to do the scenes. I originally was onboard and said, “Yes! Let’s do it!” I wanted to do something different. Then I was like, “Oh, wow! Instead of just reading this on paper, I actually have to do the scenes. Okay.” It was fine. It was super comfortable on set. We had a coordinator that made people comfortable, Anna was a great director, Kristen was amazing to work with and Dermot was amazing to work with in regards to those scenes and were both pros at them. So it was a really good experience overall.

Smashing Interviews Magazine: I understand that director Anna Elizabeth James has said she’d love to do a Deadly Illusions sequel. If so, that may certainly explain the ending (laughs). Has that gotten as far as talking to the cast about it?

Greer Grammer: I’m not sure if she’s talked to Kristen or Dermot, but she and I have talked about the possibility of a sequel, and I know that’s something we are both interested in doing. Obviously, it’s in the very early stages, so nothing is confirmed or really being worked on. We’re just saying, “Okay, what could this possibly mean?” That’s also because I’m the producer, but that doesn’t necessarily mean that Grace would be involved in that. I would hope that she would but, is it about Mary? Is it about Grace? I really don’t know what the sequel would entail. But I know she and I have discussed wanting to continue the story.

Smashing Interviews Magazine: Was it your mom or your dad that named you after Greer Garson?

Greer Grammer: It was my mom. I mean, it was a mix of both, but my mom was a very big Greer Garson fan, so it was mainly her. But my dad liked the name.

Smashing Interviews Magazine: Because both your parents worked in the entertainment industry, was the thought of pursuing a career in acting always in the forefront of what you wanted to do in life?

Greer Grammer: I think, yes. I have always wanted to be an actress since I was a little girl. If you had asked me in pre-school what I wanted to be when I grew up, I would’ve said an actor or a princess. I loved watching Disney movies as a kid. I loved playing dress up. I loved creating worlds in my head. I loved walking around and reciting lines.

My mom used to always make fun of me because I was the kid who would rather sit and watch My Fair Lady on a beautiful sunny day than go to the beach or the park. I wanted to stay in and watch old movies. I loved The Sound of Music. I just wanted to kind of live in those worlds.

So I think regardless of my dad and regardless of my mom being on film sets, I would have wanted to act no matter what. But I think that them being in the film industry definitely helped propel me into really wanting to be an actor, and what my dad did certainly kept me wanting to pursue it.

Smashing Interviews Magazine: You play Sarah Weddington in a controversial film called Roe v. Wade. How did you become involved in the project?

Greer Grammer: That was a role that was offered to me.

Smashing Interviews Magazine: What were you told about the film?

Greer Grammer: You know, I wasn’t really told all that much about it. I read the script, and there were some things that weren’t really … there were some things that weren’t in the original script that I read. I was just told, honestly, that it was showing both sides to the story of how it came to be. I obviously know it took the conservative approach.

Smashing Interviews Magazine: Sarah Weddington was the attorney who successfully argued the winning side of the landmark Roe v. Wade case before the United States Supreme Court. How did you prepare for the role?

Greer Grammer: I obviously watched a lot of period pieces. I really tried to focus on learning about Sarah, who she was and what she did. Personally, I think she’s an amazing woman.

Smashing Interviews Magazine: Do you have other upcoming projects?

Greer Grammer: No, just right now, Deadly Illusions and possibly the sequel. I have another project that I shot last year called American Boogeyman, which is about Ted Bundy. That was really fun to film. It was with Chad Michael Murray. I shot it during the pandemic, which was sort of crazy, and it’s a completely different role. I think it’s coming out this year. I did an episode of The Goldbergs earlier this year in February. I think it airs in two weeks actually. So that was really fun.

Smashing Interviews Magazine: What can you tell us about the Frasier reboot, and will you be a part of it?

Greer Grammer: I know dad’s super excited about it. He’s currently shooting a series with Alec Baldwin. I know that the reboot will be at Paramount, and I know they’re working on it. There are no discussions of me starring or coming in for a role.

Greer Grammer: I know. But I would obviously love to!

Smashing Interviews Magazine: What are your interests when you’re not working?

Greer Grammer: Oh, my goodness, good question. I’m like, “Netflix?” (laughs) I love baking. That’s my favorite thing to do. I adore baking. I love being with my friends. Obviously, we’re in the pandemic, but we’ve figured out ways to make it work. I love working out. I love hiking. I love going to the beach. Luckily, it’s pretty close by living over here. Just being in my 20s, I guess.

Smashing Interviews Magazine: Oh, to be in my 20s again (laughs). What do you want for your career and for yourself personally in the next few years?

I would just like to continue to work and do movies. Then eventually, at some point in my life personally, I’d like to get married and be a mom. I’m nowhere near that at this very moment, but I would love that in the future. And yeah, I think that’s kind of it.