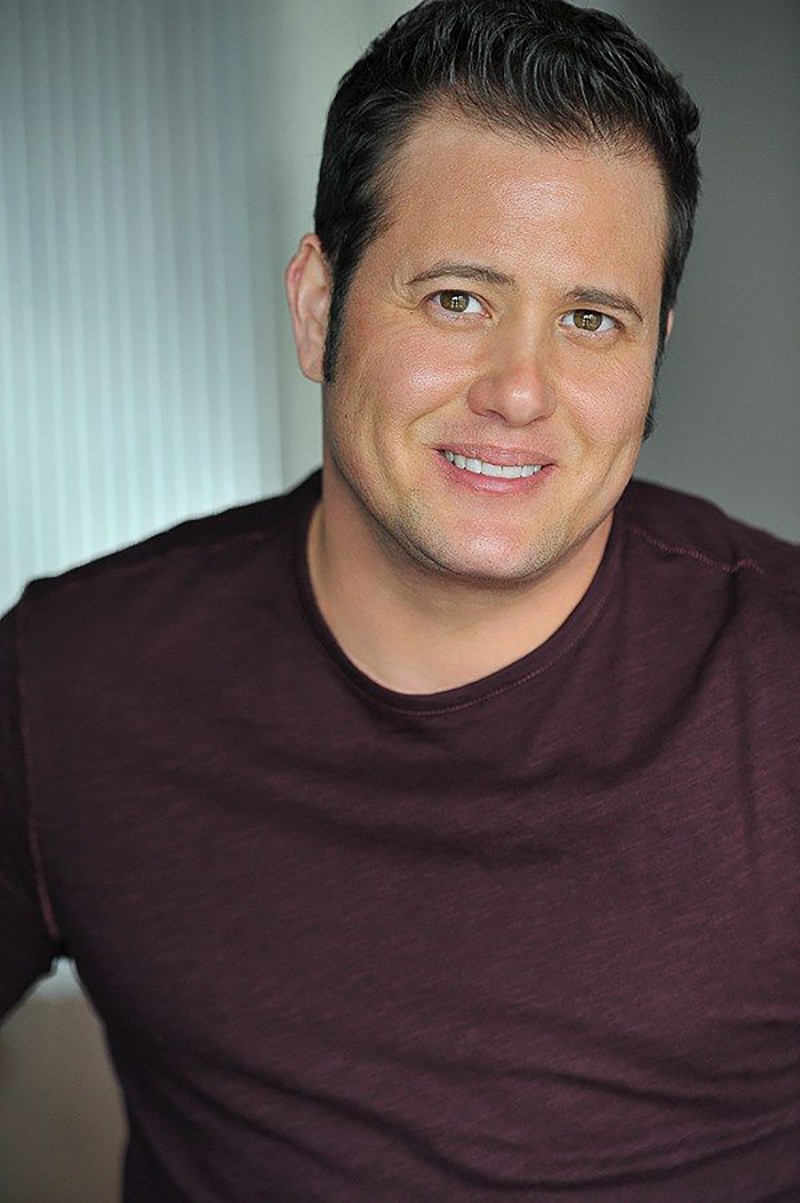 Born Chastity Sun Bono on March 4, 1969, Chaz Bono is the only child of entertainers Sonny and Cher. Bono is a transgender man, and between 2008 and 2010, underwent female-to-male gender transition. In May 2010, he legally changed his gender and name.

In September 2011, Bono became a competitor on the 13th season of Dancing with the Stars, paired with professional ballroom dancer Lacey Schwimmer. Bono has also appeared on The Secret Life of the American Teenager and The Bold and the Beautiful.

"This is what I always wanted to do. I went to school for this when I was younger. I went to the High School of Performing Arts in New York and was a drama major. I studied at the Strasberg Institute out here when I was younger. Unfortunately, acting is just one of those jobs that, prior to transitioning, I couldn’t do well. You really have to be very comfortable in your own skin to be able to do it."

Bono stars as Jerry the Hoarder in Dirty, a modern-day crime thriller that finds two dirty cops relieved of over two million dollars in stolen drugs and money, forcing them into a bizarre and mysterious investigation to recover it. In addition to Bono, Dirty features Paul Elia, Roger Guenveur Smith and Tony Denison. The film is scheduled to be released July 12, 2016, on all major digital and television VOD platforms.

Chaz Bono: Thank you very much. I have been, vigorously.

Melissa Parker (Smashing Interviews Magazine): How did you become involved in this particular project?

Chaz Bono: Paul (Elia) and I have the same commercial agent, so I knew Paul and knew about this project ahead of time. When it was coming down the pike, they sent me something to read for, and it was for a different part. It wasn’t anything I was really interested in. I called Rick, our mutual agent, and talked to him about it. I was like, “Look at this. It’s not something I’m really into. Will you find out if there’s anything else?” That part was really small, and it wouldn’t have helped my career in any way, especially for such a small indie film with no money or anything, so it was kind of pointless to do it.

Rick talked to them and found out that the only part they hadn’t cast yet was Jerry. They basically had two people they liked, but they hadn’t decided yet. They were really apprehensive about letting me read for Jerry. They just thought I was completely wrong for it in every way. They said, “We need a real actor. We need somebody like a Steve Buscemi type. He’s just physically wrong. He’s just wrong.” But Rick got them to let me go in and read for it. I liked the part a lot and had a really good take on it.

Knowing that they had this idea of Jerry physically, I went in really looking a mess. I stopped by a friend’s house who’s actually a drag performer and got made up to look horrible. I went in to read for the part in torn up pajama bottoms and a white t-shirt that I had rolled around in the mud in and a pair of sandals that my dog had chewed on. I did the audition, and I think they were kind of blown away. They gave me the part that afternoon.

Melissa Parker (Smashing Interviews Magazine): Jerry is an addict and a hoarder. What did you draw from to play that character, or are you a method actor?

Chaz Bono: I’m not a method actor. I study at the Actor’s Workshop where I’ve been for almost 40 years now. I just worked on the part and started to develop a sense of him, the physicality of the part. It was just the choices I made about playing the character, of how I felt about the other characters and about police in general. I just tried to make it as specific as possible.

Chaz Bono: A lot of people in the film I only got to meet at the table read and at the screening we had. But there are cool people in this film, some really talented actors and nice people. It’s a cool thing to be a part of.

Melissa Parker (Smashing Interviews Magazine): In the credits of the film, there was a “special thanks” to Cher. Was she also involved in the film?

Melissa Parker (Smashing Interviews Magazine): “A Cowboy’s Work is Never Done,” played during the credits. I hadn’t heard that song in a long time!

Chaz Bono: Yeah. That was my whole family. We all forfeited our royalties on that song, so that was my mom and all the Bonos.

Melissa Parker (Smashing Interviews Magazine): Dirty was filmed in 2014, so what have you done in the meantime?

Chaz Bono: I’ve done a lot of theatre. I’ve done two web series, one called Gods and Secrets. I honestly don’t know what’s going on with it, but I hear that something is. Hopefully, that will be out at some point. That’s kind of a very dark superhero series. I just finished another web series that’s a very light one called Where the Bears Are about crime-fighting gay bears. I’ve done 5 episodes of The Bold and the Beautiful. I audition. I’m just trying to work.

Melissa Parker (Smashing Interviews Magazine): So many actors say that soaps are tough because you have to learn lines quickly, often there are script changes, and usually one take. How did you find the experience?

Chaz Bono: Soaps are tricky. It was a baptism by fire for me. I had originally done two days on it that were kind of generic, but a lot of lines, so that was tricky. Then they brought me back for another three days with the character going into a totally different direction. That was a lot of fun for me because he got a lot darker, which is what I enjoy more.

The good thing about it is working with other good actors, which I was lucky enough to do, and they were up for running lines on set. We were able to get what I hope was interesting footage. Yeah. You don’t get to do many takes in soaps at all unless there are big mistakes or something technical is off. I’ve never seen them shoot more than two takes of anything. So yeah, you have to be really on your game, for sure.

Melissa Parker (Smashing Interviews Magazine): You had gotten involved in music also in the 1990s, but acting has always been your chosen career path?

Chaz Bono: Definitely. This is what I always wanted to do. I went to school for this when I was younger. I went to the High School of Performing Arts in New York and was a drama major. I studied at the Strasberg Institute out here when I was younger. Unfortunately, acting is just one of those jobs that, prior to transitioning, I couldn’t do well. You really have to be very comfortable in your own skin to be able to do it.

When I was younger, I didn’t know exactly what the issue was. I just knew there was an issue that was holding me back from being really good at acting. I figured that out in my senior year of high school when I got cast as a male in a production of A Midsummer Night’s Dream. I knew that I was probably going to have to pick another career even though acting was the only thing that I was ever passionate about.

Four years ago, I decided to get back into class and see how that felt and if I still enjoyed doing it. It quickly became very clear to me that this was the only thing still that I ever was really truly passionate about and that I was going to have to do whatever it took in order to have a career at this even though it was still something I was tackling much later in life, and I would have to overcome whatever hurdles were there.

Melissa Parker (Smashing Interviews Magazine): Well, you must be very comfortable in your own skin now because you are excellent in this film.

Melissa Parker (Smashing Interviews Magazine): Do you continue to be an active spokesperson for the LGBTQ community?

Chaz Bono: You know, honestly, I’m not really that involved with anything like that anymore. Since I started acting, I’ve really felt like I had to focus on that and had to just leave everything else aside for now. It’s really hard to get work and to be looked at as an actor for me, especially as an actor who happens to be transgender. So for these past few years, I really made the decision to just focus on this and really concentrate on my career. I’ve had to take a step away from anything of an activist standpoint.

Melissa Parker (Smashing Interviews Magazine): I see from your tweets that you are a Hillary supporter.

Chaz Bono: Yeah. I definitely care about the country and about the next direction in a general way for sure. But I’m also 7 years into my transition, and I very much am a guy. I just feel like a guy at this point.

Melissa Parker (Smashing Interviews Magazine): What fills your time when you’re not working?

Chaz Bono: Normal stuff. I have friends. I’m still in class. I produced a play, and I’ve done other people’s productions. I’m also in a musical theatre parody company. We’re taking films and turning them into shortened musical parodies. We’re doing Independence Day now, which we tend to do every year around this time.

I’m not a workaholic, but that’s what I really enjoy doing. When I have time to relax, I like to play video games.

« Sidney Blumenthal Interview: Clinton Confidant on Political Work, "The LA Times Calls That a 'Payout.' I Just Call It Pay for Work"
Sean Giambrone Interview: On Breakthrough Role as Adam in ABC's Hit Comedy "The Goldbergs" »