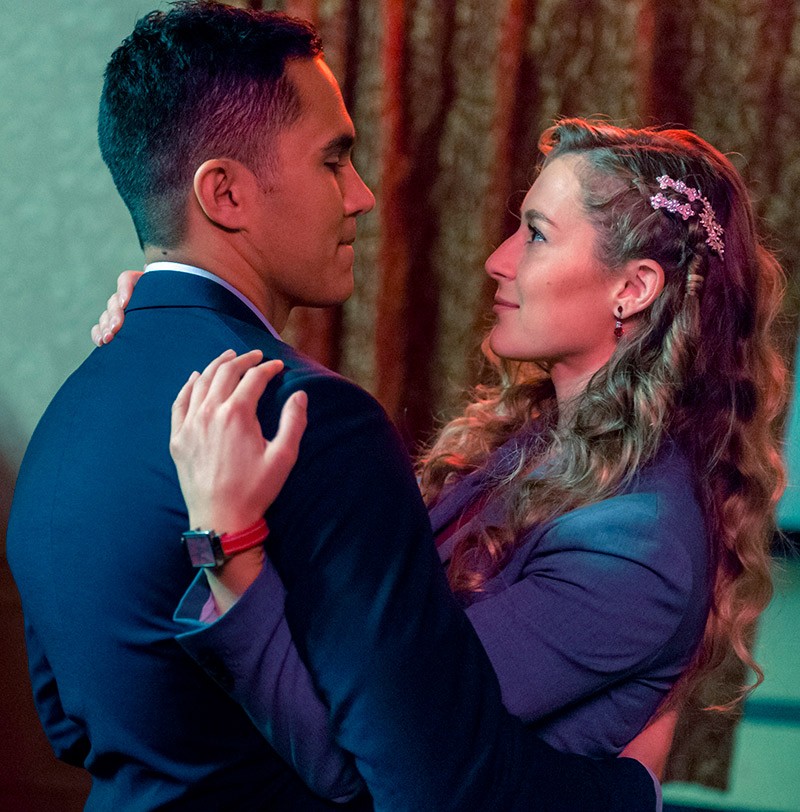 Alexa PenaVega and her real-life husband Carlos PenaVega star in Enchanted Christmas, a new, original movie premiering Sunday, November 12, 2017, at 8/7c on Hallmark Channel as part of the network’s annual, popular “Countdown to Christmas” programming event. Alexa is known for her role as Carmen Cortez in the Spy Kids film series and starred in the Hallmark Channel movie Destination Wedding.

Carlos is best known for starring on the Nickeloden series Big Time Rush as Carlos Garcia in addition to being a member of the band Big Time Rush. Alexa and Carlos competed against each other on season 21 of Dancing with the Stars, in which Bindi Irwin and Derek Hough were the winners. The couple welcomed a son, Ocean King PenaVega, on December 7, 2016.

"Carlos is obsessed with cruising, so he actually has booked us a Christmas cruise (laughs). We’re taking off and enjoying the seas. But we love cruising, and for Carlos, he just figured we needed to get away for a little bit. The ship has everything we need in one place."

Alexa PenaVega: We love Hallmark and support them quite a bit. Carlos and I had been looking for a project to do together. Hallmark approached us and said they felt they had found the perfect project that we both would enjoy doing because we both love dancing, and this is heavily involved with dance. It all just started from there, so really we have Hallmark to thank.

Melissa Parker (Smashing Interviews Magazine): Tell me about the movie and your characters.

Carlos PenaVega: Well, the movie is just fantastic! I’d say it’s definitely your typical Hallmark Christmas movie, but it’s different because it’s got dance, and it’s got Alexa and me in it, which is super awesome (laughs). She’s laughing. But it’s a really cool love story. These are old flames who basically reunite in their old town, and dance brings them back together, and they have this really epic dance number at the end.

I don’t want to give too much away. There’s a lot of dancing. There’s a lot of love, and the characters are so much fun. I play Ricardo, and Alexa plays Laura, and they could not be more opposite. But in the end, they make one.

Melissa Parker (Smashing Interviews Magazine): You two are veterans of Dancing with the Stars, so did the dancing come easy for you?

Alexa PenaVega: Especially when a pro is not pulling you around. When it’s a husband and wife who are not nearly as good as the pros, it’s a little harder (laughs).

Melissa Parker (Smashing Interviews Magazine): This is the first movie where you were both in lead roles. Was the working together perfect bliss or imperfect bliss?

Carlos PenaVega: Like any marriage, the husband and wife have some disputes. We might’ve had one little disagreement, but it just happened to be during filming of the finale dance scene. I get very insecure when a lot of people are watching me dance because I just don’t want to mess up.

Alexa kept messing up (laughs). She’s looking at me right now. She’s giving me the eye. But I was getting a little embarrassed, and she was telling me to just relax. We’re like pinching each other, and we’re doing the dance, so I can tell you it looks very passionate. The passion is there. Hold on, I’m about to get in the dog house.

Alexa PenaVega: What I was about to say was that if I could do every project with you, I would. I love working with my husband.

Carlos PenaVega: That’s a beautiful … hey, would you scratch what I just said (laughs).

Alexa PenaVega: He does have a lot of redeeming qualities. I promise (laughs).

Carlos PenaVega: Thank you, my angel.

Melissa Parker (Smashing Interviews Magazine): From what I’ve seen and heard, it appears Carlos also likes to cut up (laughs).

Alexa PenaVega: Oh, yes! You know, I never stop laughing with him, although he never stops talking. The one joke that we always make is that there’s not a breath wasted with Carlos (laughs).

Carlos PenaVega: Listen, life is short. I want to get it out as much as I can.

Melissa Parker (Smashing Interviews Magazine): Are you guys critical of each other’s performances?

Alexa PenaVega: Oh, my gosh! Stop it! (laughs) When we’re on set, it’s very different. We are super uplifting. We have to do these tapes at home where you send in for the audition, and we critique each other. We just get in these little arguments because I’m like, “I think you should do it this way.” He’s like, “No. I really think I need to do it this way.” That’s where we’ll have our little disagreements, but not on set.

Melissa Parker (Smashing Interviews Magazine): Alexa, you have managed to have a successful career as a child and also now as an adult, so was that transition tough for you?

Alexa PenaVega: I’ve always been thankful. I’m not even kidding when I say that I feel like God has just really put a beautiful path in front of me because I never had to deal with a difficult transition. You hear about these transitions, but I’ve been very fortunate to work with people that I really enjoy who have been able to put me in projects that allowed me to make that transition really peacefully and easily.

I’m really proud of what I’ve done and how I’ve gotten here. I feel like, especially with Hallmark and the last projects I’ve done with them, that I’ve been able to transition into more of a young woman in the industry and doing projects that I enjoy.

Melissa Parker (Smashing Interviews Magazine): Carlos, do you still have fans clamoring for a resurrection of the band Big Time Rush?

Carlos PenaVega: I don’t think that a day goes by that I don’t see a comment or something, and it’s like #BringBigTimeRushBack, which by the way, I am totally for. You can totally get me on the record. I’m totally for bringing Big Time Rush back. I think everybody’s just doing their own thing right now. I think it took the Backstreet Boys 15 or 20 years to get back together, so we’re like five years in. Give us another five or ten, and we’ll see what happens. I’m totally down for that.

Melissa Parker (Smashing Interviews Magazine): What else is going on with you two?

Alexa PenaVega: Right now, we have a website we just launched. What are you calling it, Carlos? Oh yeah, it’s a lifestyle brand. Basically, we’ve been designing these clothes and jewelry and things that we really like, and we’re trying to turn out quality, positive products to the people out there for a great cause. We’ve teamed up with some really awesome small companies and are trying to give them a bit of a push that otherwise maybe would’ve had a harder time getting started. We’re just using our platform for that.

Alexa PenaVega: Right now, Carlos is filming a TV show in Canada, in Vancouver for the CW. We’re currently developing two projects with a company called IM Global, and hopefully we’ll get to see those pan out. We’ll see what happens.

Melissa Parker (Smashing Interviews Magazine): What’s the secret to making a marriage and a business partnership work and taking care of an infant at the same time?

Carlos PenaVega: His name is Jesus!

Alexa PenaVega: It would be our faith. We met at a Bible study, and for us, it has really given us the best foundation. Yeah, I would say our faith is 100% of what allows us to keep going and make the decisions we make for our family.

Alexa PenaVega: He is just the cutest little thing. We both just work hard. We’ve been working on finding what the right things are to do as a parent because every child is going to be so different, and we both come from such big families where each and every one of our siblings is not like the other. We’re just taking it one day at a time and learning as much about our little boy as we can.

Melissa Parker (Smashing Interviews Magazine): Carlos, what is the most important thing you want your son to learn?

Carlos PenaVega: I have to say that it’s grace. This world is just kind of crazy right now, and if there’s anything my wife has taught me, it’s grace. She has so much grace for me. I’m not perfect, and nobody’s perfect. I think if all of us in this world had a little more grace for each other, it would be a much happier place.

Melissa Parker (Smashing Interviews Magazine): How will you celebrate your first Christmas in Hawaii?

Alexa PenaVega: Carlos is obsessed with cruising, so he actually has booked us a Christmas cruise (laughs). We’re taking off and enjoying the seas. But we love cruising, and for Carlos, he just figured we needed to get away for a little bit. The ship has everything we need in one place.

Carlos PenaVega: Yeah, and maybe one day, I’ll be a cruise director. It’ll be fun.

Carlos PenaVega: Or maybe play a cruise director in a movie.

Melissa Parker (Smashing Interviews Magazine): Episodes of The Love Boat are roaming around in my head with Carlos at the helm (laughs).

Carlos PenaVega: Let’s bring The Love Boat back on the Hallmark Channel.

Alexa PenaVega: That’s what he said. The Love Boat on the Hallmark Channel (laughs). You heard it here first.