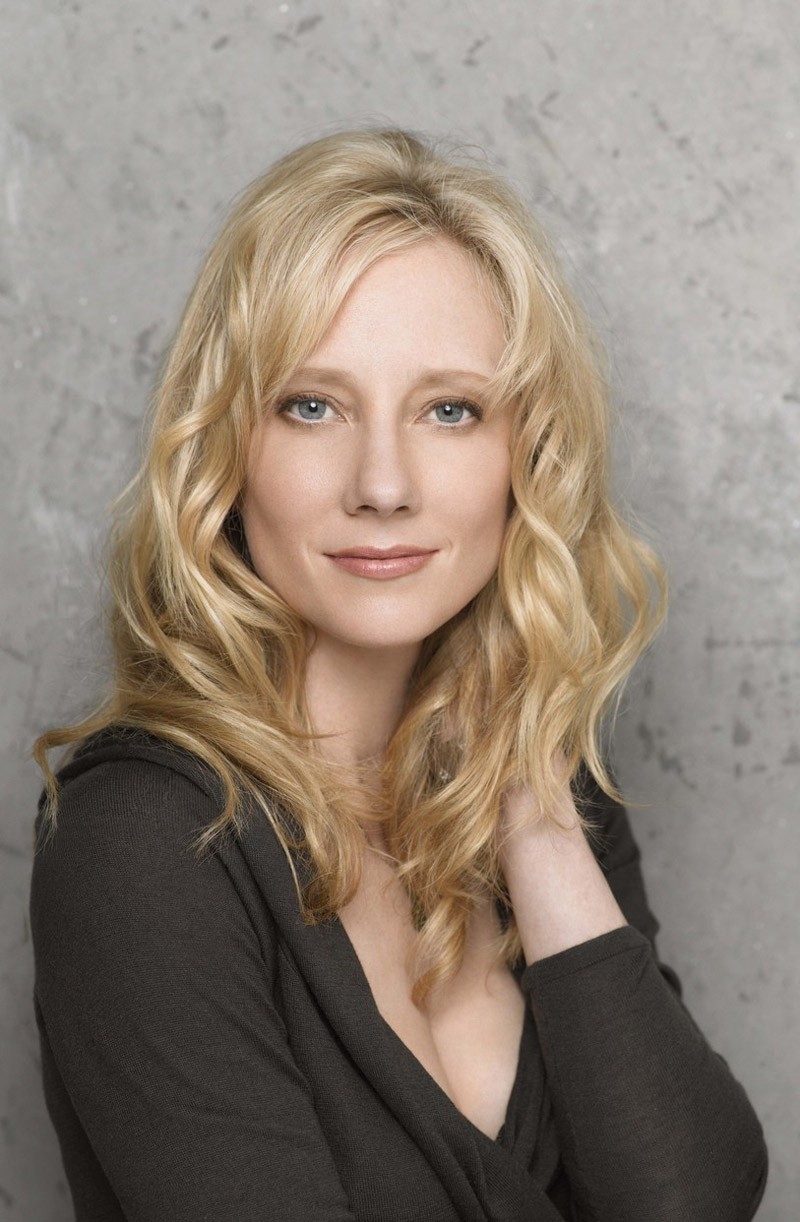 That’s What She Said was directed by Carrie Preston (True Blood and Good Wife) and debuted at the Sundance Film Festival this past January. Based on the play, Girl Talk, the film also stars Marcia DeBonis and Alia Shawkat.

"I think people are still surprised when girls talk as raw as they do on film as they do in life. I think they think the 'language' is raunchy. When girls speak the truth and talk honestly about sex or romance or their needs or their obsessions, it seems to be translated as raunchy."

Melissa Parker (Smashing Interviews Magazine): Anne, how are you today?

Anne Heche: I’m terrific. Oh, I like your accent. Where are you living?

Anne Heche: Cool. Thanks for taking the time out to talk about That’s What She Said.

Melissa Parker (Smashing Interviews Magazine): Sure, and what is so ironic is that just forty-five minutes ago I received a request to interview your significant other, actor James Tupper.

Anne Heche: No way! That’s hilarious! If he were in the room with me right now, I’d just put him on (laughs).

Melissa Parker (Smashing Interviews Magazine): (laughs) Let me ask you, did it require some practice to perfect smoking and brushing teeth at the same time?

Anne Heche: It definitely did, and I thought if I could pull it off, then this character will be funny, and if I can’t, I’m dead in the water. So, yes, it was the whole beginning, middle and end for how this character began. I mean, she’s such a wreck, you know? She is just a train wreck from beginning to end. She has no self-esteem, her hope is all gone.

I really did start building from that person who would really do that. She was so desperately connected to self-destructive ways that she wouldn’t put out a cigarette before bushing her teeth. Really, that’s how raw and nasty a person she is. I felt like to do this role, she needed to be in that the whole time until released at the end until the redemption. Everything was kind of dictated by that kind of self-destructive self hatred.

Melissa Parker (Smashing Interviews Magazine): How would you describe Dee Dee if you were just talking to a girlfriend?

Anne Heche: That she has lost all hope. She has no self-esteem. She’s stuck in ways that are not helpful to her or others and that she has become such a craggy wreck of a person that she has forgotten how to love, not only herself, but others. And that’s the unfunny part (laughs).

Melissa Parker (Smashing Interviews Magazine): That is the unfunny part (laughs). Why do you think the film has been described as a raunchy comedy?

Anne Heche: It might be about raunchy people. I think people are still surprised when girls talk as raw as they do on film as they do in life. I think they think the language is raunchy. When girls speak the truth and talk honestly about sex or romance or their needs or their obsessions, it seems to be translated as raunchy.

Melissa Parker (Smashing Interviews Magazine): As opposed to when men speak it in film or in life.

Melissa Parker (Smashing Interviews Magazine): Why was it written (by Kellie Overbey) to show no faces of men in the film at all?

Anne Heche: Well, it started out as a play, so there was really just a cast of three, and I think they wanted to stay true to the art form. Nobody is pretending that this is a big budget film. They really wanted to do the play as a movie and to do that and stay true to it; there were some rules they didn’t want to break. Kellie and Carrie both really wanted to make a film about girls, and then thought it would be interesting, just like they had chosen to do on stage, to literally not see the faces of men, and also having that be a part of their obsession with themselves.

They put so much onto these men. They’ve given so much power to these men that giving them a face, I think, felt to Carrie like she was cheapening the experience of a woman having to wrestle her own understanding of herself while watching the film with men in it would be like giving them too much power in their lives.

Melissa Parker (Smashing Interviews Magazine): How did you keep from laughing during your humping "encounter" with the eighty five year old man in the bathroom?

Anne Heche: I didn’t. Somebody asked me, “What was the one that made you laugh the most?” It was that bathroom scene. Of course, not to blow anything for anybody, but there are so many people that end up in the bathroom at one point. But, from the moment that I opened the door and Alia (Shawkat) is standing in the corner in her funny little dress with her panties down around her ankles, I’m like … that whole day was just one ridiculous, hilarious thing after another.

We wouldn’t show them what was happening in the bathroom before they walked in during filming, and then they would start laughing as they went in. That would make us all start laughing, and we’d have to start over. One by one, each person kind of would be exposed to how funny that scene was. It just became the joke of the day, a rolling joke.

Melissa Parker (Smashing Interviews Magazine): What was the experience like working with actress/director Carrie Preston?

Anne Heche: She is just a ball of fire. She’s got fiery red hair, and it suits her personality because she is just an energetic, enthusiastic, talented, viciously committed person who has had more faith with this film than I think I’ve ever seen anybody have about a movie. From her dedication to directing it, to the story, to the financing, to Sundance, she has been nonstop.

It is Carrie’s belief that made it, and it’s really something to behold. There are very few people that have that much will to make something happen, and she did. Carrie deserves all of the support she’s getting. She is really quite a lady.

Melissa Parker (Smashing Interviews Magazine): Do you have a BFF that you can fight and cry with during times of trials and tribulations?

Anne Heche: I don’t think I’ve ever gotten into a fistfight with a girl. My friendships … I guess I’d have to say they don’t run that deep (laughs). So, that one I’ve been able to avoid fortunately. I think Marcia (DeBonis) and I would like to avoid that for the rest of our lives as well. We were bruised from head to toe after that day. Smoking and brushing your teeth is challenging. That fight was a challenging experience and talking as much as we were during the fight was quite a feat. But, of course, I have friendships.

I think we all have a particular brand of our friendship that we felt was necessary to bring to this movie and make sure that everyone understood our commitment to our friendships. Nothing else matters. That’s what this movie is about. So, although I haven’t gotten into a fistfight, I have very, very close friends that, if they read this, may want to arm wrestle me today. We’ll see what happens (laughs).

Melissa Parker (Smashing Interviews Magazine): That may be interesting (laughs). What’s next for you, Anne?

Anne Heche: I’m thrilled to be shooting a half hour comedy for NBC called Save Me. We did the pilot this year, and we’re fortunate enough to get picked up for thirteen, so we’re just about ready to go and shoot a season of television.

Melissa Parker (Smashing Interviews Magazine): Have you and James (Tupper) acted together in many projects?

Anne Heche: Yes. Oh, this is good for you to know! James and I met on Men in Trees, so we worked together for three years in Vancouver, then worked together to create a little baby, a crazy little kid … we have a three-year-old son. Well, not so little. His name is Atlas, and he lives up to it. He is quite a big boy.

We did a movie, although I don’t know if he’ll admit this or not, called Toxic Skies together in Canada. When the writer’s strike happened, God bless Canada – he’s a Canadian – and they joy of our lives was that they asked us to do a movie together that came at a time when nobody was working. We were very blessed.

Anne Heche: Oh, my golly. I always kind of wanted to be an inventor, so I would come up with these ideas all the time and things I wanted to do. I did come up with one, and James said that if he listened to me say one more thing and then see it actually happen in the world, he was going to kick himself, so he said, “The next thing you invent, I’m gonna get behind.” And he did.

We just created and invented a product called “Tickle Time,” which is a mineral powdered sunblock for kids. We’re very excited about it. We’re trying to change the tradition of putting on sunblock and having kids wince and scream and run away from us and turn it into a fun time in the morning. That’s called “Tickle Time.” That just came out. So, I guess I can check that off my list.

I don’t know about other inventions, but it has been pretty fun to make that one happen. My doors are open right now to me in kind of miraculous ways. I’m really looking forward to seeing where this life is going to take me.

Melissa Parker (Smashing Interviews Magazine): Continued success to you whatever that may be, Anne.

Anne Heche: Thank you so much. I hope you have fun talking to James. If he says he hasn’t worked with me, you’d better give me a call!