John Corbett Interview: The Perils of Booze and Drugs and the Temptations of Pretty Women 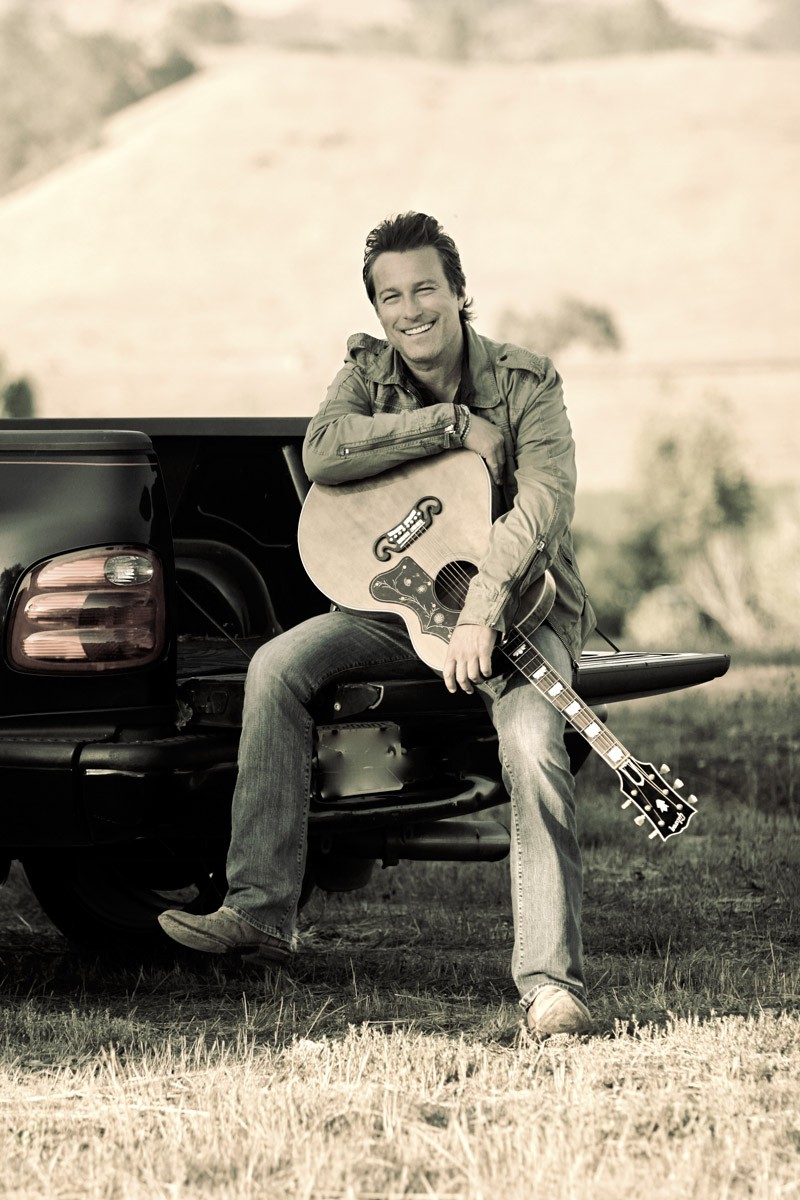 As an actor, John Corbett is best known for playing Chris Stevens on the CBS TV series Northern Exposure and Aidan on Sex and the City, reprising his role for the series movie sequel Sex and the City 2. Other film and television appearances include My Big Fat Greek Wedding, Tombstone, Elvis Has Left the Building, Montana Sky, Ramona and Beezus, November Christmas, A Smile as Big as the Moon, The Wonder Years, Parenthood, NCIS: Los Angeles.

Corbett is also a very talented musician. His self-titled album, released in 2006, climbed to No. 42 on Billboard’s Country Albums chart. With his new album, Leaving Nothin’ Behind, Corbett confirms what fans of John Corbett, the actor, quickly recognized … he was never just moonlighting as a singer. Leaving Nothin Behind was released earlier this year and features tracks primarily written by Texas songwriters.

"There’s a lot of booze out there to be had, a lot of drugs and pretty women. You’ve got to find a way to live your life and balance all those things. It’s a struggle for men and women to be married to somebody and then go out on the road and meet pretty gals. She thinks she has met the most interesting guy she has ever seen. It’s hard. Life’s hard, right?"

The versatile performer has been in a relationship with actress Bo Derek since 2002.

Melissa Parker (Smashing Interviews Magazine): John, how are you today?

John Corbett: I’m good. Where are you?

John Corbett: I know Birmingham. We played there at WorkPlay a few years back.

Melissa Parker (Smashing Interviews Magazine): I know the place. You also filmed a movie called A Smile as Big as the Moon in Huntsville at Space Camp. How did you become involved in the project?

John Corbett: That was a cool experience. We got to live there and hang out with all the smartest people on the planet. I did a movie about two years before that for Hallmark. These Hallmark movies are kind of top shelf projects because you’ll do maybe one a year. They usually build them around the holidays. All of the commercials are Hallmark. They’re just cool. If you get to do one of them in your career, you’re lucky, but man, I got to do two in a year and a half. It’s just all luck, you know?

John Corbett: That was the first one I did for them, right.

John Corbett: They usually try to get a tear going somewhere (laughs). Hallmark is out of Kansas City, and they’re just a great group to work for. The Hall family still owns the business. I just enjoyed working for those guys. In A Smile as Big as the Moon, I played Mike Kersjes who still lives down around Huntsville. He’s a schoolteacher who took all the kids to Space Camp.

John Corbett: Still live there sometime during the year. I’ve got a little farm there.

John Corbett: No. I left after high school, graduated in ’79. I just wanted to get a job. My mom and dad split up when I was a kid. He was a welder in southern California, and he put me to work in a steel factory in 1980. I just needed to come out here and get to work.

Melissa Parker (Smashing Interviews Magazine): Your last album was released seven years ago. Why the wait to record another one?

John Corbett: Well, I don’t wear a watch (laughs). I feel like a couple of months have gone by, and it’s a year and a half. Then that three years I wanted to make that second record just doubled up on me and time went by. Still, if I didn’t put my mind to it, I’d still be sitting around going, “Oh, I’m going to make another record one day.” You’ve just got to put your mind to something, and then go make it happen. Time just gets in the way. The first thing you know, you’re an old man with grey hairs in your beard.

Melissa Parker (Smashing Interviews Magazine): How does this album differ from the first one?

John Corbett: That’s a good question. You know, the big difference is when I made the first one, I never really sang in front of people. I never did a concert. I made the first one just as a little pet project with my buddy, Tara Novick, who I had been playing guitars with for almost twenty years. He was one of the first guys I met when I moved to Hollywood in 1986.

We went to Nashville and met some cool people, and said, “Let’s make a record, man. When we get to be old men, we’ll look back at it and remember we made this when we were kids.” When it was finished, we said, “This is really good. Let’s put a band together and go out and play some shows for people.” That’s what we did. The big difference is I think I’ve done maybe 600 shows since that first record. I had much more confidence when I went in to make this one.

Melissa Parker (Smashing Interviews Magazine): Is there a theme? I was sort of sensing the theme of alcohol, drugs and attitude (laughs).

John Corbett: There’s not really a theme. It just turns out that I like those kinds of murder ballads, you might want to call them, more than, “the sun is out shining” and “there’s a unicorn on my lawn today under a rainbow.” I just like the sort of dark themes better. What I do for a living mostly is act. It pays the electric bills. You’ve got to go where the work is. When people call, most of the time they want me to be in some romantic comedy where everybody wins in the end. I’m happy to play those roles, but I’m just a little happier when people want me to play a bad guy.

I just did a movie in New Orleans and got to be a bad guy who was a drug dealer and kills people and gets to feed their dead bodies to the alligators. Those roles are just more fun to play. The sort of darker themed songs are just more fun to me. I like the theme about going out and drinking whiskey more than I like, “Oh, I met a pretty girl today, and we had coffee at the coffee shop.”

Melissa Parker (Smashing Interviews Magazine): It is more interesting. Art is the same way, in my opinion.

Melissa Parker (Smashing Interviews Magazine): Were some of the songs on the album meant to be a nod to your Catholic upbringing?

John Corbett: Yeah, “Cocaine and Communion.” There are all kinds of temptations out there in the world. Many of us have some kind of a moral upbringing. I went through twelve years of Catholic School. Then you get out in the world, and you have to find your way through it.

There’s a lot of booze out there to be had, a lot of drugs and pretty women. You’ve got to find a way to live your life and balance all those things. It’s a struggle for men and women to be married to somebody and then go out on the road and meet pretty gals. She thinks she has met the most interesting guy she has ever seen. It’s hard. Life’s hard, right?

Melissa Parker (Smashing Interviews Magazine): Is she your official photographer?

John Corbett: Yes, she is. Bo shot the cover for the first record and many photos in it, and then on this one, I said, “Let’s go out in the backyard and shoot some photos and see what we come up with." We shot them right in our backyard. I just think she’s a great photographer. She’s a great woman.

Melissa Parker (Smashing Interviews Magazine): Did you two meet on a blind date?

John Corbett: My buddy had a party. He has a big Oscar party every year. He’s a great guy named Norby Walters, and he invited me to this party that was kind of a couples thing. I wasn’t dating anyone at the time. I’d been with a girl a couple of years earlier, but we weren’t dating anymore.

I said, “I can’t come to your party this year, Norby. I’m not dating anyone.” Norby said, “Oh, I’ll get you a date.” I said, “No thanks.” I had never been on a blind date in my life. He said, “Leave it to me.” A couple of days later, Norby called and asked, “How would you like to take Bo Derek?” I said, “Get outta here.” He said, “She wants to come and doesn’t have a date. Give her a call.” We had dinner the night before this event just to see if we liked each other, to see if we wanted to spend four hours hanging out together. We hit it off and have been together ever since.

John Corbett: Oh, yeah, every day … every day. Even though that was twelve years ago when I first did the TV show Sex and the City. Well, we did the second movie about three years back. But I guess people will keep calling me that for a long time to come.

Melissa Parker (Smashing Interviews Magazine): Believe it or not, I remember you appearing as a hippie on The Wonder Years around 1989.

John Corbett: Oh, that was my first job.

Melissa Parker (Smashing Interviews Magazine): Was that your first audition as an actor?

John Corbett: No. I probably auditioned for a year before I got that job. No, it was about two years. I was about ready to give up acting because it was and still is a tough way to make a living. It’s not easy. You spend most of your time unemployed. I spent a whole year unemployed. I did one job in a year that took about three weeks to shoot.

I’m glad The Wonder Years came along because I wouldn’t have had this great life. I was just about ready to try something else. I gave it two years in Hollywood. I didn’t have any luck and was very frustrated, then, bang, I got The Wonder Years. I didn’t work again for two more years (laughs). I think I worked three days on The Wonder Years, so in four years, I had one job that lasted three days. But I stuck with it.

Melissa Parker (Smashing Interviews Magazine): When will the new film be released?

John Corbett: It’s called The Lookalike and will probably be out this year. It’s a small budget, independent movie that was shot in New Orleans. This kid, Richard Gray, directed the film. He’s a great director from Australia, and this was his fourth movie. He took a chance and let me play a bad guy, which doesn’t happen all the time. Jerry O’Connell, Justin Long and Steven Bauer are in the film. It’s a neat little cast.

John Corbett: No. That ended. I did two seasons of Parenthood. Now I’m just a viewer again like everyone else.

Melissa Parker (Smashing Interviews Magazine): John, I wish you continued success in both the acting and music careers.

John Corbett: Thanks for taking the time today to help me out. Great talking to you.