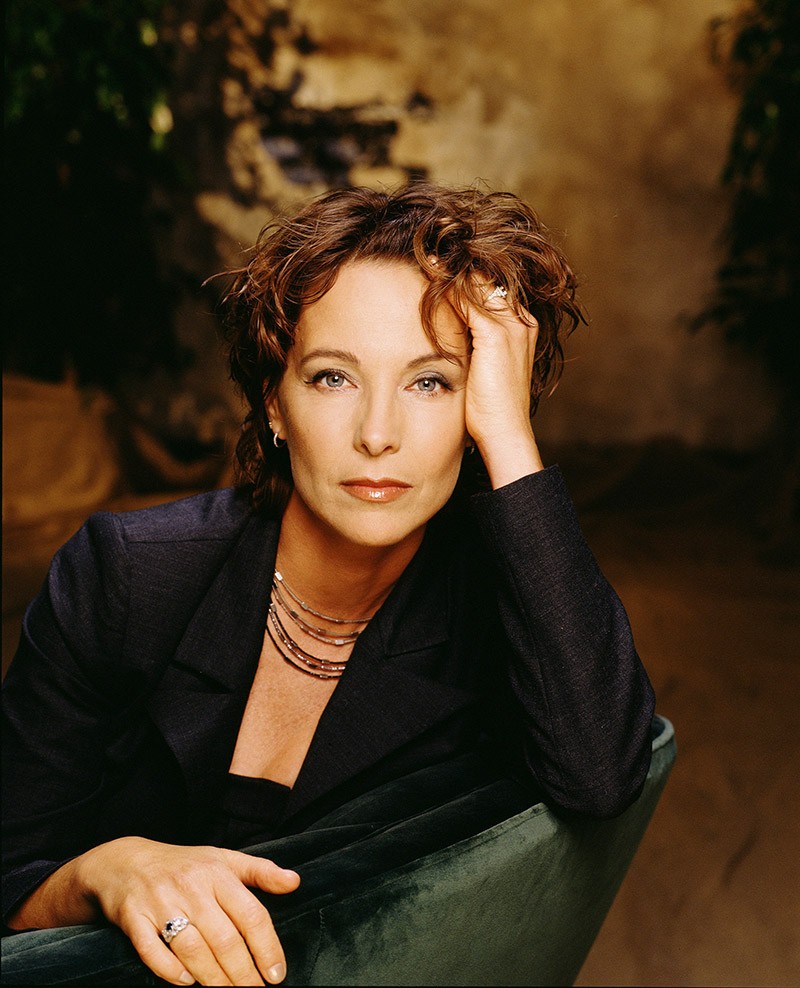 Television and film actress Kathleen Quinlan made her film debut at age nineteen in American Graffiti (1973). As a young actress, she guest-starred in several 1970s television series including The Waltons, Kojak, Ironside, Police Woman and Lucas Tanner. In 1999, Quinlan starred in the CBS drama Family Law opposite Christopher McDonald and Dixie Carter.

Quinlan has appeared in over fifty films, but is perhaps best known for her roles in the film version of I Never Promised You a Rose Garden and her Oscar nominated turn as astronaut Jim Lovell’s wife Marilyn in Apollo 13 opposite Tom Hanks. Other film appearances include Clara’s Heart, The Doors, Trial By Jury and A Civil Action.

"I don’t think I ever intentionally set out to be an actor, oddly enough. I did it in high school, and then I did it in college. You know who I was in the drama department with in college? Robin Williams. God bless him."

Set in the winter of 2002 in chilly upstate New York, Quinlan’s latest release called After. The film tells the story of a middle class family struggling with the financial consequences of a failing business and a series of intergenerational conflicts, rivalries and an intricately buried secret that, if revealed, could alter their lives irrevocably. After can be seen in New York, Los Angeles and VOD.

Quinlan has been married to actor Bruce Abbott since 1994, and they have a son, Tyler.

Melissa Parker (Smashing Interviews Magazine): Kathleen, I understand you filmed After a few years ago?

Kathleen Quinlan: They contacted my agent, and then he said, “This script is kind of interesting. You ought to read it.” I went, “Okay.” I’m always looking for a story, some kind of real story and a well fleshed out character, something to play, something to kind of work me out so to speak. I felt that this script had all of the above, so in three days, I was there.

Melissa Parker (Smashing Interviews Magazine): I read that Mandy Gonzalez (who plays Molly Valentino) said the first day everyone sat down and talked about what they had gone through in their own lives and how it affected them, so it sounds like producer Pieter Gaspersz was trying to bond everyone together as sort of a family.

Kathleen Quinlan: Right. Right. We had some time to hang out, not a lot, but everybody was very dedicated. I talked a lot with Pieter and Sabrina (Gennarino). That’s what really anchored me.

Melissa Parker (Smashing Interviews Magazine): Would you call it a film about how a family copes after a personal tragedy rather than a 9/11 story?

Kathleen Quinlan: Yes. It’s about a secret, you know, either a secret or a traumatic event that occurs within a family dynamic and what people think are the best intentions, how they deal with it, how they process it and how it affects the communication in the family.

Melissa Parker (Smashing Interviews Magazine): When you choose a role, what are some of the things you consider before auditioning or jumping right in, and does that differ depending on how long you’ve been an actor?

Kathleen Quinlan: It’s the story. Can I challenge myself in some way? Is there something here that I can express? You know, like a painter. That’s pretty much been it all along. But in terms of outside logistics that has nothing to do with the film, where do I have to go? Is my husband willing to hold the fort while I’m gone? (laughs)

Melissa Parker (Smashing Interviews Magazine): Why did you want to become an actor?

Kathleen Quinlan: I don’t think I ever intentionally set out to be an actor, oddly enough. I did it in high school, and then I did it in college. You know who I was in the drama department with in college? Robin Williams. God bless him.

Then it was quite naïve on my part, and I said, “Oh, I don’t know what else I’m going to do, so maybe I’ll move to Los Angeles and work as an actor.” It just kind of started from there because they had done America Graffiti at my high school, and that kind of gave me a ticket in. But when I realized it was a medium where you could reach people in some way, touch people’s lives in some way, then I thought that was really pretty exciting.

Melissa Parker (Smashing Interviews Magazine): Did you meet the real Marilyn Lovell to prepare for your role in Apollo 13?

Kathleen Quinlan: Oh yeah, sure I did. That was the same as After in terms of I felt a great responsibility to demonstrate or portray or represent somebody’s life. So yes, I met Marilyn, and she was so gracious and helpful. Jim and Marilyn flew me to Houston. Jim actually flew the plane, and Marilyn sat in the back serving coffee. It was really cute.

I met a lot of the astronauts’ wives, and I realized when I met them and talked with them what a strong, important influence they were on their husbands and where they were in their minds before they took off. They had to be really ready, and it had a lot to do with who was there supporting them. Marilyn was very helpful.

Melissa Parker (Smashing Interviews Magazine): Is it tougher for an actor to portray a “real” person?

Kathleen Quinlan: Well, it’s certainly scarier, I can tell you that. You’re going to have to meet the person at the other end of the film. I wasn’t so scared to see the film, but I was scared to see Marilyn when she came out of the theater to see if she felt okay with what I did (laughs).

Melissa Parker (Smashing Interviews Magazine): I recently saw you on an episode of The Waltons.

Kathleen Quinlan: Oh, The Waltons! I didn’t get to go to their … they had a big anniversary, and I really wanted to go, but I couldn’t make it. I loved that. That was great.

Melissa Parker (Smashing Interviews Magazine): Do you have fond memories from appearing on so many television shows during that time?

Kathleen Quinlan: Oh, I sure do. I got to work with James Garner a couple of times. He was a great champion. David Hartman was a great supporter of mine. I worked with him in a pilot, and then I worked with him later when he was doing Good Morning America. I have fabulous memories of working in television. In those days, of course, it was, “Oh, you’re a television actor,” like you were less than a film actor, but nowadays it doesn’t matter anymore. They’ve all crossed over. Now TV is the preferred medium (laughs).

Melissa Parker (Smashing Interviews Magazine): Absolutely, and now you can also be in a web series.

Kathleen Quinlan: Yes. I do a web series with Rodrigo Garcia and Julia Stiles called Blue.

Melissa Parker (Smashing Interviews Magazine): One of my favorite roles was an early one in I Never Promised You a Rose Garden, and you were in your early twenties. What was that like playing such a complex character in the beginning of your career?

Kathleen Quinlan: Fortunately I had been raised in two drama departments, one at Mount Tamalpais High School in Mill Valley with Dan Caldwell and the other at College of Marin with Harvey Susser and Jim Dunn. They were very cutting edge and serious, so I was framed with a lot of discipline, and I was given a lot of tools early on.

I was very fortunate for something like that to land in my lap. I knew the magnitude of the work, but I had no idea how rare it was because I was so young. It was a bit of a harrowing experience because I didn’t have a lot of technique then. I just had a lot of emotion. It was a great, great opportunity, and I was so happy how many people it moved. That meant a lot to me, but after that, it was more of a desert territory for a while there (laughs).

Kathleen Quinlan: Me too.

Melissa Parker (Smashing Interviews Magazine): I imagine that was a great experience working with the wonderful Dixie Carter.

Kathleen Quinlan: I had worked with Dixie in New York at Joseph Papp’s theatre. Then it was Joseph Papp’s, but later it was the New York Shakespeare Festival. That was the first time I met Dixie, so it was great to get to work with her again. It was devastating when she died at such a young age. She was so talented.

Kathleen Quinlan: No he’s not. I keep encouraging him and try to cattle prod him out there, but he won’t do it. He’s actually a very successful designer and has designed quite a few houses in Malibu, in Agora and in Calabasas and certainly our homes. He has done three of ours, so he’s always creative. He’s always creatively active, but we’re a couple of homebodies. We’re not too exciting.

Kathleen Quinlan: Right. It’s called Horns, and I play Daniel Radcliffe’s mother. There’s another film called ADDicted. They’re in the postproduction phases right now. After has opened in New York and Los Angeles. Other than that, I’m just going to go home and get back to work.

Melissa Parker (Smashing Interviews Magazine): You mentioned you were a homebody. Do you like to cook?

Kathleen Quinlan: I’m sort of done with the cooking thing. Bruce is a much better cook than I am. We have a ranch, so there’s never a lack of anything to do (laughs).